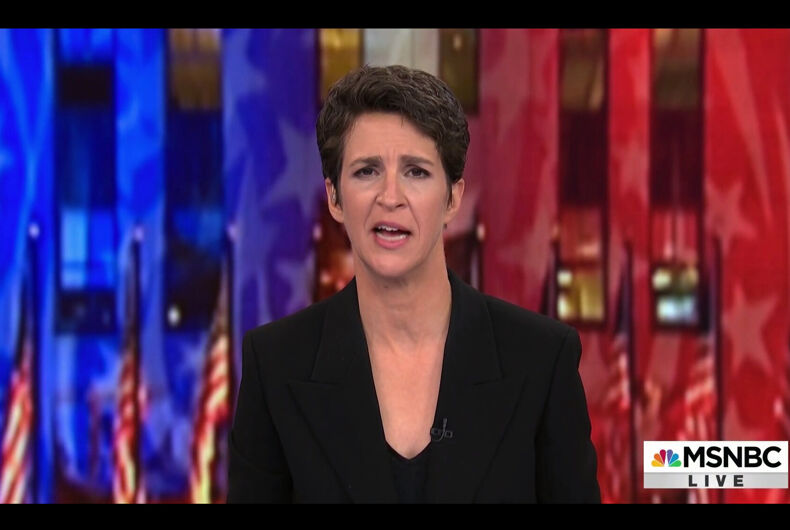 Out journalist Rachel Maddow gave Americans a great explainer on how former Attorney General Bill Barr and the man who nominated him – Donald Trump – were just caught in their lies in a federal court.

The MSNBC host discussed a decision from D.C. District Court Judge Amy Berman Jackson from this past Tuesday, where the judge ripped into Barr for false statements he made about the investigation into Russian interference in the 2016 elections in order to justify his department’s decision not to prosecute Trump for his various possible crimes.

Related: Maddow finds shocking fact about Capitol riot: “I don’t understand how this isn’t the headline!”

“In a federal court decision that will follow Bill Barr around for the rest of his life like toilet paper stuck to his shoe, a federal judge in Washington, D.C. found last year that when Robert Mueller turned in his report on the Russia investigation to the Justice Department, Attorney General William Barr lied to the public about what was in it,” Maddow said about a decision from last year.

Now Judge Jackson said that Barr lied to the court about the same investigation, accusing him of “misrepresentation” and a “lack of candor” about why Trump never faced charges based on evidence found by investigators.

“William Barr was found by a federal court to have lied to the country about the Mueller investigation,” Maddow said, referring to a decision from last year.

Barr said in the past that he consulted with Justice Department lawyers before deciding not to prosecute Trump. He claimed those lawyers told him that – despite all the evidence to the contrary – Trump hadn’t actually committed any crimes and therefore couldn’t be prosecuted.

But Jackson didn’t buy it, saying that she questioned whether it was Barr’s “intent” to create a narrative around the Mueller report that was “substantively at odds” with what was actually in it. She ordered Barr to release proof that government lawyers gave him impartial advice not to prosecute Trump, which might not actually exist.

“She says they have been ‘disingenuous’ about this part of the process too,” Maddow explained. “She said, in fact, William Barr decided from the outset that President Trump wouldn’t be charged with any crimes and what he had the Justice Department cook up for him was an after-the-fact rationalization of that decision he had already made.”

She then went on to criticize the Biden administration for its “look fowards, not backwards” stance on the possible crimes of the Trump era.

“Merrick Garland is the attorney general now, all new leadership at the Justice Department, all new priorities, moving forward with a million things at once, and here’s a judge saying, you know, your immediate predecessor in this job lied to me, lied to the court and lied to the American public about something as freaking serious as why the former president was not charged with crimes,” Maddow said. “You cool with the evidence of all of that being released to the public? Because it’s coming out in two weeks unless you want to appeal my ruling.”

I saw a problematic transgender athlete on television 45 years ago