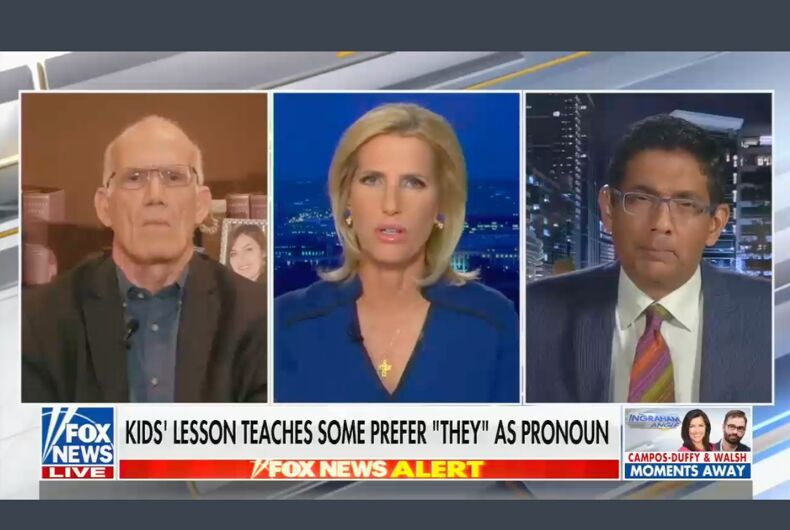 Controversial Fox News pundit Laura Ingraham has been one of the channel’s most vociferous supporters of former President Donald Trump and his racist and demeaning rhetoric.

But a grammar lesson that explains how the words “they” and “them” are used as pronouns had Ingraham apoplectic at the idea children could learn how to speak and write English.

Ingraham has raged against immigrants, and frequently complains when they don’t speak English, but somehow the woke brigade is behind this simple lesson on two common words and their many uses.

Ingraham claims that teaching about they/them pronouns is part of the “systemic radicalism” of education and “very insidious,” like lessons on America’s history of racism.

“It kind of takes the kids away from their family setting, or maybe their religious values ― whether you’re Muslim or Christian or Jewish, what have you, and breaks that bond,” Ingraham said. “The goal is to break the bond with the nuclear family.”

The Hoover Institution’s Victor Davis Hanson and conservative author Dinesh D’Souza appeared in the segment with Ingraham and D’Souza quickly stepped in to agree.

“Absolutely. At some level, you’re tempted to take this as comedic, as ridiculous. It’s material for satire. But these people are deadly serious. They actually aren’t kidding. They are trying to redefine basic categories, in fact, categories supplied by nature itself,” D’Souza added. “I think the real pathology here is that white America, and you see this throughout society, is immobilized by the accusation of racism.”

“People who don’t have a racist bone in their body don’t know what to say,” he said. He did not explain what gender-neutral pronouns has to do with race.