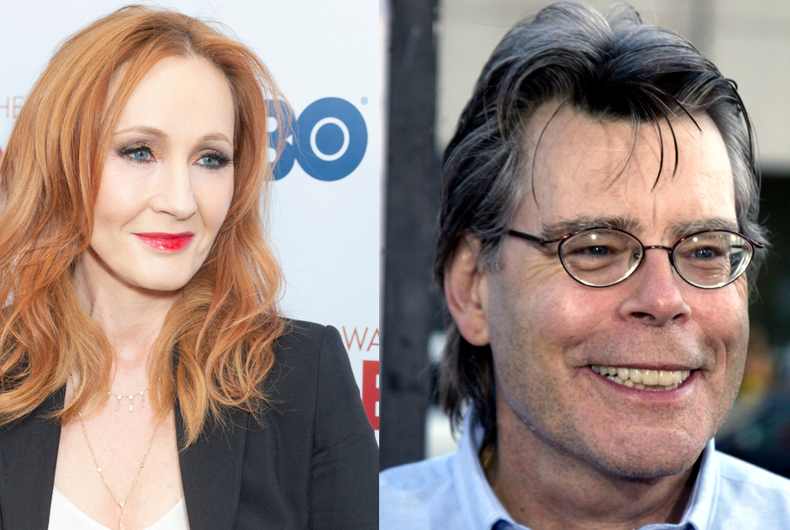 Author Stephen King is speaking out about cancel culture, but his take on the issue might surprise his fans. King says he’s experienced getting canceled, but not from fans.

Rowling posted a thread of transphobic tweets last year declaring that trans women are really just “men” [who] “demand that we (women) give up our hard won sex-based rights” including female-gendered spaces such as restrooms, prisons, and locker rooms. Rowling also continued painting trans women as sexual predators by posting statistics about women sexually assaulted by men in locker rooms, something which has nothing to do with trans women.

After King retweeted this particular tweet from Rowling’s thread, Rowling praised him in follow-up a tweet that read, “It’s so much easier for men to ignore women’s concerns, or to belittle them, but I won’t ever forget the men who stood up when they didn’t need to. Thank you, Stephen.”

A reader who saw that King had retweeted Rowling then publicly tagged King in a tweet which read, “You should address the TERF tweet. By telling us constant readers if you believe trans women are women.”

In response, Rowling deleted her praise for King.

“Jo canceled me,” he said. “She sorta blocked me and all that.”

“Here’s the thing: She is welcome to her opinion. That’s the way that the world works. If she thinks that trans women are dangerous, or that trans women are somehow not women, or whatever problem she has with it—the idea that someone “masquerading” as a woman is going to assault a “real” woman in the toilet—if she believes all those things, she has a right to her opinion.”

“And then someone tweeted at me, ‘Do you think trans women are women?’ and I said, ‘Yes, I do.’ And that’s what she got angry about—my opinion,” he added. “So, nobody has ‘canceled’ J.K. Rowling. She’s doing fine. I just felt that her belief was, in my opinion, wrong. We have differing opinions, but that’s life.”

Rowling has attacked the transgender community repeatedly over the past few years, causing staff at her publishing agency to rebel against her new work. Actors from the Harry Potter film series have denounced her transphobia, and authors left the Blair Partnership, a literary agency that also represents Rowling after it refused to affirm its support for trans equality.

Rowling tried defending her transphobia in a 3,700-word rambling essay that was widely panned by both fans and critics. Her words have since been used to kill pro-transgender legislation in the United States.

“As far as ‘cancel culture’ itself goes,” King added, “all that’s happening here—and I think a lot of conservatives hate it—is that the way they’re used to doing business no longer works as well as it used to. You’re going to be held accountable for what you say and what you do. That’s the American way, OK? There’s nothing odd about that, and there’s nothing radical about that. If you do the crime, you gotta do the time.”