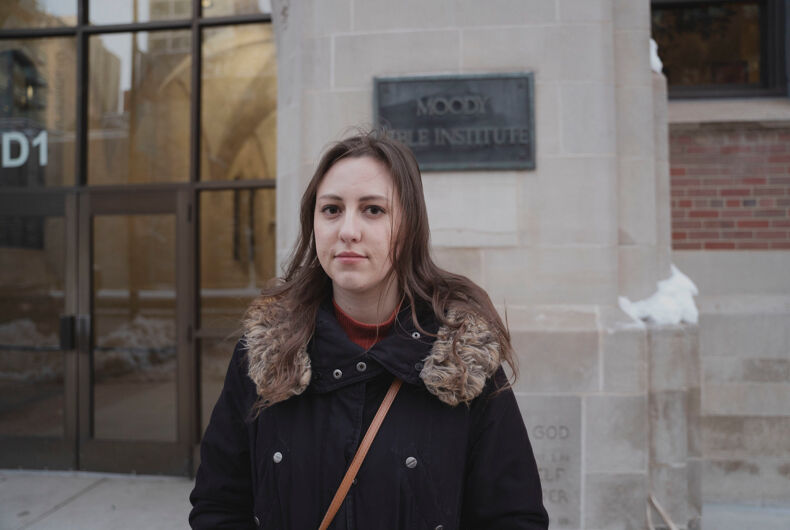 Two weeks before graduation in 2020, I was counting down the days until I would receive my diploma from Moody Bible Institute (MBI). Graduation was set to be virtual that year due to COVID-19, but that couldn’t overshadow my joy. My cap and gown were still laid out, ready for me to wear alongside my family on a day I had been looking forward to for years. I had completed my studies and every academic requirement; all that was left for me to do was attend graduation, receive my diploma, and celebrate the end of my undergraduate career.

The excitement and thrill of my upcoming commencement were quickly stifled, however, when I received an email from two members of MBI’s administration requesting I meet with them over concerns they had. Within a few days and less than two weeks before graduation, I was on a Zoom call with them and was informed that MBI had a process leading up to graduation in which faculty on campus could object to a student’s graduation. Several had objected to mine. The reason for their objection was clear: they did not want an out lesbian to graduate from MBI.

Related: SCOTUS rules that anti-LGBTQ religious schools have a right to taxpayer money

During the meeting, I was asked to plead my case for why I deserve to receive my diploma, despite that I had already completed all graduation requirements. I was asked invasive questions concerning my romantic and sexual history, my mental health, and whether I intended to romantically or sexually pursue women after MBI, among other sensitive subjects.

It became obvious that unless my answers aligned with MBI’s anti-LGBTQ beliefs, they would refuse me my diploma. In order to graduate I was forced to hear their hateful, bigoted comments about my past, present, and future as a lesbian.

That meeting was not an isolated event. I had feared losing my diploma since I came out two years earlier. During those years between my disclosure and graduation, I had at least ten meetings with administrators. All were focused on their disapproval of my sexual orientation. This same sentiment was expressed not just by the administration, but also by my peers and professors.

I was exposed daily to homophobic rhetoric in casual conversations, in academic settings, and in comments directed at me. I consistently felt unsafe, unsupported, and unprotected by my classmates, staff, and the administration. The message was clear: Queer people are not welcome at Moody Bible Institute.

Unfortunately, my story is not unique. A recent survey by College Pulse revealed that 12 percent of students at religious colleges and universities identify as non-heterosexual, and 2 percent identify as a gender minority  (e.g. non-binary, genderqueer, transgender, agender, etc.). There are thousands of students like me at religious colleges across the nation. These schools continually show us that we don’t belong and we don’t matter.

By just existing, we walk around with targets on our back, constantly alert for physical or verbal discrimination. What makes this even worse is that these schools receive federal funding, meaning they are refusing LGBTQ students fair treatment and protection on the taxpayer dollar.

On March 30, I joined a historic civil rights lawsuit against the U.S. Department of Education on behalf of myself and 32 other LGBTQ students and alumni from religious colleges and universities. This lawsuit demands that Moody Bible Institute and all other religious campuses receiving federal money stop discriminating against LGBTQ students.

This complaint, brought by the Religious Exemption Accountability Project, asks the court to declare that federally funded anti-LGBTQ discrimination at more than 200 religiously affiliated schools in the United States is unconstitutional. If the court rules against us, it will allow these schools to continue harming LGBTQ students.

It’s time for our government to hold accountable the institutions they fund by requiring them to safeguard all students on their campuses, regardless of sexual orientation or gender identity. This lawsuit is an opportunity for me and countless others to demand that our government end LGBTQ discrimination on religious campuses and require them to respect, protect, and support their students. Without intervention, thousands of students will remain vulnerable, unheard, and unsupported.

Megan Steffen is a Michigan native turned proud Chicagoan with a career focused on community organizing and human rights. She holds a degree in Bible and human services from Moody Bible Institute and has regularly been involved in religious communities since her childhood. With her recent involvement in a lawsuit concerning the treatment of LGBTQ+ students on religious colleges and universities, Megan is dedicating her time to advocating for the fair treatment of LGBTQ+ people in faith-based and religious communities.