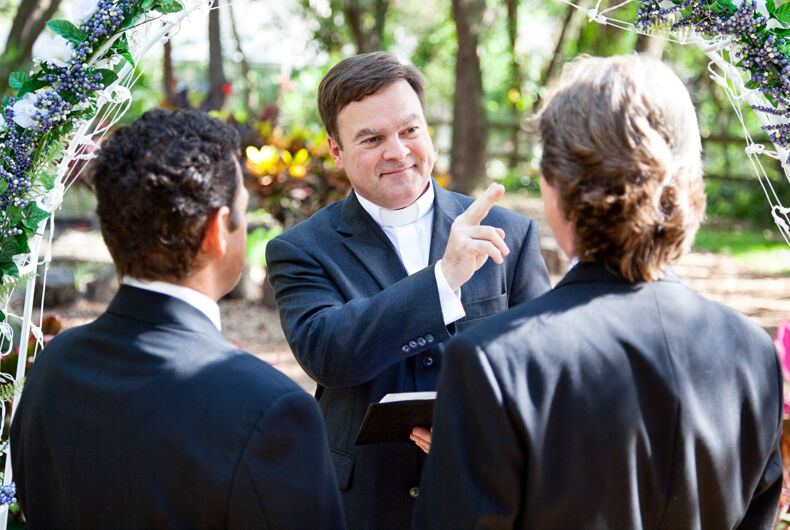 The four churches in the German state of Bavaria are expected to be the first of several to go against the larger Catholic Church’s rules. A grassroots initiative has organized more than 100 services throughout the country where same-sex relationships will be given divine favor.

Despite his more progressive views and comments in comparison to past popes, Pope Francis reaffirmed the Vatican’s longstanding policy that same-sex unions can be recognized — but not blessed or ordained — by the Catholic Church as recently as March.

According to the German Catholic News Service (KNA), activists in the Maria 2.0 movement (also known as Mary 2.0) are organizing the mass defiance. Maria 2.0 is an initiative by Catholic women that challenges the traditionally misogynist or sexist ways of the Church and tries to enact progressive change within the Catholicism.

Renate Spannig, a spokesperson for Maria 2.0, said that they worked with the four Bavarian churches to hold the blessings in the week leading up to the International Day Against Homophobia, Transphobia and Biphobia.

Pastor Bernd Mönkebüscher, an out priest in the Archdiocese of Paderborn who took part in the organizing, told a German broadcaster, “when people ask for a blessing for their love and partnership, who am I to appear as a church and say… that is [a] sin?”

Rev. Jan Korditschke, who will lead blessings in services upcoming on May 16, told the Associated Press that now he is “convinced that homosexual orientation is not bad, nor is homosexual love a sin.”

While the German Bishops Conference, representing archdiocese leaders, has criticized the movement and opposes it, the lay organization Central Committee of German Catholics is in support of it.

“These are celebrations of worship in which people express to God what moves them,” Birgit Mock, a spokeswoman for the Central Committee who plans to attend the blessings, has stated.

The Congregation for the Doctrine of the Faith, the orthodoxy office created in the Vatican to “defend” the Church’s doctrine, released their latest official explanation in March, after the Pope “gave his assent” to it.

In answer to the question, “does the Church have the power to give the blessing to unions of persons of the same sex?” The Congregation formally said that same-sex relationships and LGBTQ families are “valued and appreciated,” but that the Church can’t “justify” those relationships before God.

“When a blessing is invoked on particular human relationships, in addition to the right intention of those who participate, it is necessary that what is blessed be objectively and positively ordered to receive and express grace,” the response stated, “according to the designs of God inscribed in creation…”

“For this reason, it is not licit to impart a blessing on relationships, or partnerships, even stable, that involve sexual activity outside of marriage… as is the case of the unions between persons of the same sex.”

While same-sex relationships have “the presence” of “positive elements, which are in themselves to be valued and appreciated,” the Church refuses to “render them legitimate objects of an ecclesial blessing, since the positive elements exist within the context of a union not ordered to the Creator’s plan.”

The Central Committee has said that they believe this position from the Vatican is “not helpful.”