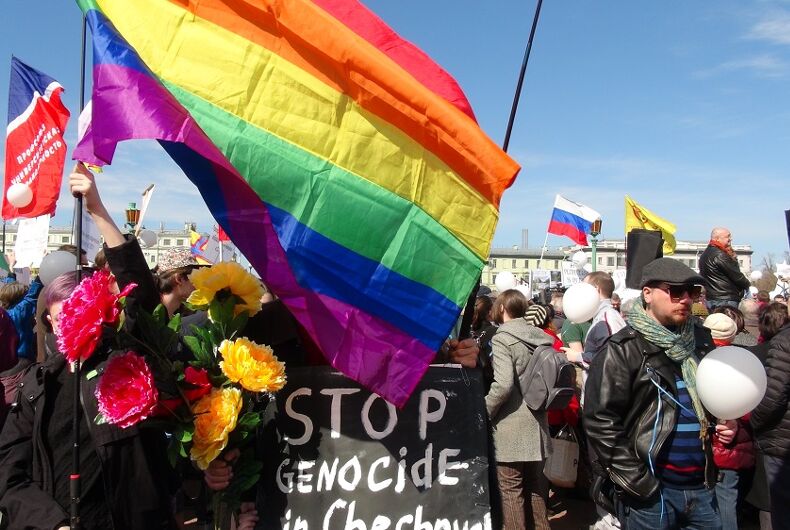 Saint-Petersburg / Russia - 05.01.2017: participants of the May Day rally on the central street of the city. LGBT activists protest against gay repressions in Chechnya.Photo: Shutterstock

Five high-ranked Chechen leaders are cited in a German criminal complaint for crimes against humanity in connection to the country’s anti-gay purges, in what could be a historic case on global LGBTQ human rights.

Four years after the first reports of gay and bi men being tortured to death in concentration camps in the semi-autonomous Russian republic, the general prosecutor has to decide whether to take on a case based on a 97-page charge sheet against members of Chechen leader Ramzan Kadyrov’s inner circle.

Related: A gay refugee was forced to apologize on TV for ‘disgracing’ Chechnya

The charges, according to The Guardian’s report, include persecution, unlawful arrests, torture, sexual violence, and incitement to murder of at least 150 people due to their sexual orientation.

The organization European Center for Constitutional and Human Rights (ECCHR) submitted the rap sheet to the general prosecutor in Karlsruhe. If it’s accepted, the Chechen leaders it names will be arrested if they ever enter Germany.

In 2017, the Russian newspaper Novaya Gazeta reported that at least 100 gay and bi men had been put in camps by authorities in Chechnya. At least 26 of the men at the time were reported to have died after being tortured in the camps.

French activists petitioned the ICC to charge Chechen leaders with crimes against humanity, but it couldn’t do anything since Russia had already withdrawn from the court’s jurisdiction.

“In an imperfect system of international criminal justice, with an ICC [International Criminal Court] with limited jurisdiction, Germany attempts to guarantee that Europe is no safe haven for war criminals,” said ECCHR’s Wolfgang Kaleck. “If no other jurisdiction investigates, Germany is able and must be willing to take over tasks, representing thereby Europe and the international community.”

While the criminal charges may not lead to prosecution if the defendants never go to Germany again, activists hope that the resulting investigation will help LGBTQ people from Chechnya claim asylum in Europe.

“In states like Chechnya, where there is a strong taboo around sexual identity, there is usually very little information about the situation of LGBTQ people,” said Patrick Dörr, who works for Germany’s Lesbian and Gay Federation. “Any legal action that leads to a better documentation of how strong people are persecuted or protected can make a crucial difference for an asylum application.”

In 2017, the Chechen government denied the report and Kadyrov’s office went so far as to deny that any LGBTQ people exist in the country.

“You cannot arrest or repress people who just don’t exist in the republic,” a Kadyrov spokesperson said. “If such people existed in Chechnya, law enforcement would not have to worry about them, as their own relatives would have sent them to where they could never return.”

More detention centers were discovered and international pressure mounted as a protestors all over the world demonstrated in solidarity with queer Chechens.

Russia also denied the reports while the U.N., Europe, and the U.S. condemned the country. Several European nations took in refugees from Chechnya as the situation worsened and the organization Russian LGBT Network worked to get queer Chechens to other parts of the Russian Federation where they were safer, but they were sometimes forced to go back.

Three of the five people named in the charge sheet are known to the press, and they include Deputy Prime Minister Abuzayed Vismuradov and police chief Ayub Katayev, who have already been sanctioned by the U.K., E.U., and U.S. The chair of the Chechen parliament, Magomed Daudov, is also named in the complaint.

Colton Underwood’s Netflix show could be cancelled over stalking allegations