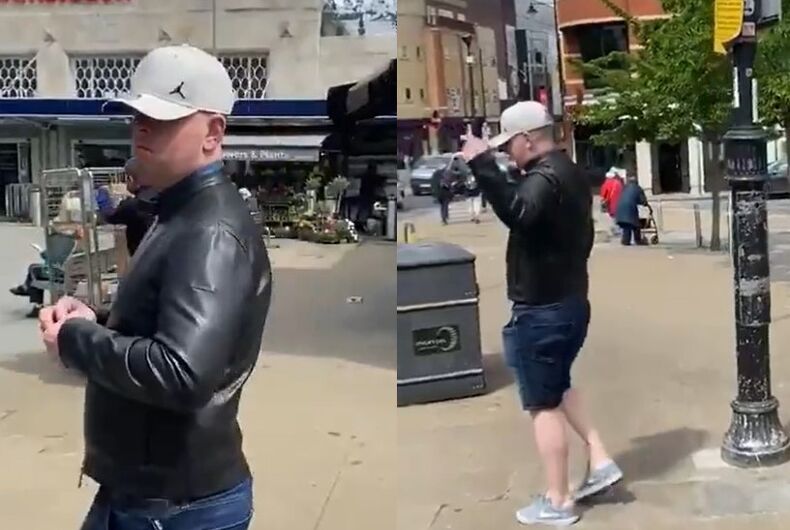 The man caught spitting at the gay couplePhoto: Screenshot/Twitter

A gay couple says that a man they didn’t know spat at them and called them “dirty homos” as they were walking and holding hands in public, so they ran up to him and confronted him.

“I was absolutely furious at what had happened,” Josh Barnett, 24, told Pink News. “I just could not believe it.”

Barnett said that he was talking in the Wimbledon district of London earlier this month with his 21-year-old boyfriend Nathan in the middle of the day, when they heard “spit hit the floor.”

“We turned around to be faced with a man who, after spitting at us, proceeded to call us ‘dirty homos,’” Barnett said.

He pulled out his phone to confront the man.

“You were just spitting at us and calling us homos. You’re on camera,” Barnett can be heard saying in the video. The man made an obscene gesture in response.

Barnett said that the man then ran away.

“Normally wouldn’t do this, but Nathan and I were walking through Wimbledon holding hands, when this guy spat on the floor just behind us and proceeded to call us ‘dirty homos’ & swear. It’s disgusting. We continued holding hands and are proud, but come on…in 2021?” he wrote in the tweet.

Normally wouldn’t do this, but Nathan and I were walking through Wimbledon holding hands, when this guy spat on the floor just behind us and proceeded to call us “dirty homos” & swear. It’s disgusting. We continued holding hands and are proud, but come on…in 2021? Be kind ✌🏼🏳️‍🌈 pic.twitter.com/I8K6xUfCwO

Barnett said the “support from the LGBTQ+ community has been overwhelming” in response to the video.

The police even encouraged him to file a report, which he did the next day. He said that Wimbledon Police took the incident seriously and he gave them the video, but they haven’t been able to identify the man yet.

He said that he is glad he stood up to the man, but explained that he only felt safe in doing so because it was the middle of the day and so many other people were around.

“I wanted to stand up to him and film him as calling out and exposing this sort of behavior is the only way people like him learn they cannot do that to someone, and it also shows others that it is still happening,” Barnett said.