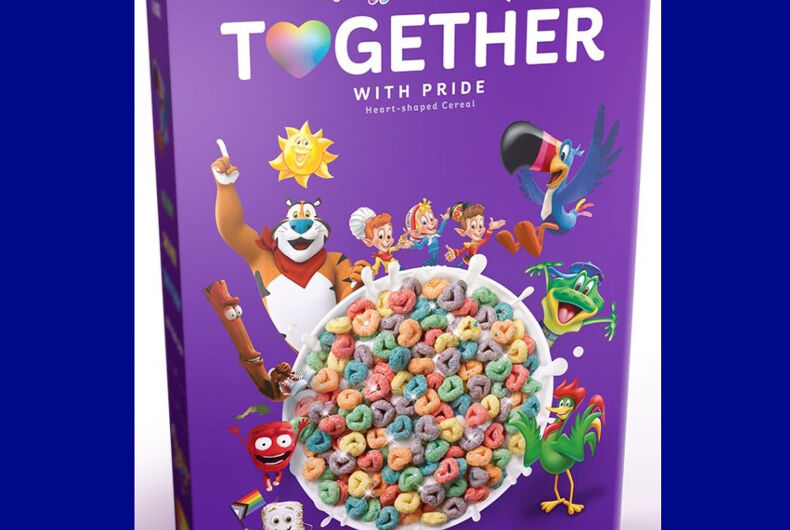 Together with Pride from Kellogg'sPhoto: Kellogg's

Kellogg’s released a new cereal for Pride Month, “Together with Pride,” which has rainbow-colored cereal hearts in the colors of the rainbow flag, covered in edible glitter.

Kellogg’s announced the cereal last month, and right on cue, several religious right and anti-LGBTQ groups are trying to boycott the conglomerate for daring to support LGBTQ people.

2nd Vote, a consumer organization that claims to be the “Conservative Watchdog for Corporate Activism,” called the company “a poor choice for values-conscious consumers” for partnering with the LGBTQ group GLAAD.

Deriding the Equality Act – which would add sexual orientation and gender identity to federal anti-discrimination laws – as “an unprecedented attack on freedom of expression” that will “force religious organizations to validate every aspect of the LGBT agenda,” 2nd Vote claims Kellogg’s has “cave[d] to ideological pressure from the left” by making cereal.

“Instead of buying food coloring-soaked hearts coated with glitter, consider a healthier offering from a different brand that serves its customers instead of bowing to far-left activists,” the group wrote on its site under a picture of out actor Raymond Braun and out actress Trace Lysette holding a previous Pride cereal by Kellogg’s.

2nd Vote rates companies based on how much they lean to the left or right. Kellogg’s has a “1,” indicating it is “liberal” as opposed to the brands Post and Flower Foods, which got “3” for neutral.

The Ruth Institute, an anti-LGBTQ hate group led by longtime marriage equality opponent Jennifer Roback Morse, deemed the cereal another product of “a radical agenda that targets children and families.”

More said, “Not only are they pushing the LGBTQ agenda, they’re directly subsidizing it.” She mocked the company for supposedly “virtue-signaling to the cultural elite and everyone who buys in to its agenda.”

“They’re saying ‘We’re nice guys. We love everyone. Buy our product,’” Morse whined. “Apologies to Tony the Tiger, but ‘Grrrreat!’ it’s not.”

The Catholic organization American Society for the Defense of Tradition, Family and Property (TFP) has started a petition against the cereal, claiming “pro-homosexual agenda is rearing its ugly head in your children’s cereal” and calling the cereal “sickening and perverted.”

The TFP claims to have over 21,000 signatures on their petition, which directs a message at Kellogg’s CEO Steve Cahillane saying, “I am disgusted by your company’s new cereal promoting unnatural sin… Homosexuality is not something to be promoted or celebrated. Promote purity and virtue, not lust and vice.”

LifeSite News, which was recently banned permanently from Facebook in addition to YouTube, published an article complaining that the cereal has “pronoun options” on the box, referring to a space on the top which allows consumers to write their pronouns on them. This is Kellogg’s attempt to ensure children “can go woke just after waking,” they claim.

“It is important, apparently, for children to think deeply about gay issues at breakfast,” the article stated.

This is not the first time Kellogg’s has released something for the LGBTQ community that earned conservative backlash. Just having LGBTQ people in their commercials has sent anti-LGBTQ people into a frenzy.

For every box purchased, Kellogg’s is donating $3 of the $3.99 suggested retail price to GLAAD if customers upload their receipt to their website.