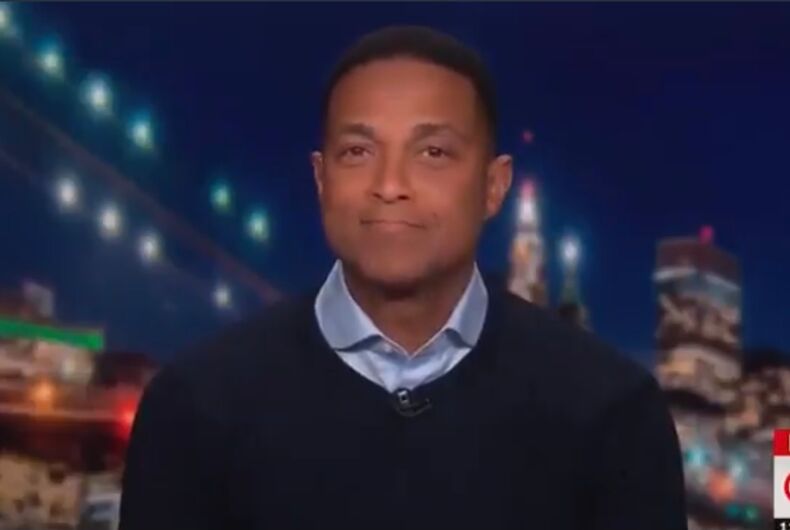 Update: Lemon and CNN has revealed “what comes next” ahead of his originally announced Monday date. “CNN Tonight With Don Lemon” is being replaced with the similarly named “Don Lemon Tonight”, in the same time slot and apparently in the same format.

“Didn’t mean to set the internet on fire. What I said last night was true,” Lemon wrote online.

Didn’t mean to set the internet on fire. What I said last night was true. CNN Tonight with Don Lemon is no more. I’ll be back on Monday with my newly named show Don Lemon Tonight. See you Monday at 10pE. pic.twitter.com/89GFXULV9m

Out CNN anchor Don Lemon caused a frenzy last night as he announced at the very end of Friday’s show that this was his last at the helm hosting CNN Tonight.

“This is the last night that will be CNN Tonight With Don Lemon,” he told millions of viewers seconds before the following hour of CNN, a pre-taped special featuring Lemon on R&B singer Marvin Gaye, began. He said what comes next will be announced on Monday.

The abrupt announcement left many assuming that Lemon was leaving the network, which he has worked at 15 years after getting his start over at NBC News.

Hours before Lemon’s announcement, out reporter Jon Nicosia said in a tweet that he has a “scoop” that “before June 1, a big CNN anchor will be out the door.” The timing led many to believe it was Lemon who was out, but Nicosia would clarify afterward that he was not talking about Lemon.

Right before the show, Lemon also tweeted a video of him from his office, saying he had an announcement to share with his audience. “An end of an era… should I say that?” he said in a video posted to Twitter.

Another @CNNTonight exclusive. I have a big announcement. I hope you’re ok with it. See you at 10pE. #CNN pic.twitter.com/YlvNjuN5ea

A tweet from Jordan Lancaster, a reporter from the right-wing, Tucker Carlson-cofounded outlet Daily Caller, also assumed that Lemon had held “his last show on CNN,” and went viral right after the show went off the air with a clip of Lemon’s quick message.

“So earlier, I told you I had an announcement, and I do,” Lemon said in the clip. “It’s been really, really great — this is the last night that [there] will be… CNN Tonight With Don Lemon,” he said before pausing.

“So, I appreciate all the years of ‘CNN Tonight With Don Lemon,’ but changes are coming, and I will fill you in, but until then, I am very proud of my CNN special about Marvin Gaye’s groundbreaking album, What’s Going On. What’s Going On: Marvin Gaye’s Album for the Ages starts right now,” Lemon concludes as his last show ends.

“So I got back down to my office after the show… everybody calm down!” Lemon said in a video. “I didn’t say I was leaving CNN, I just said it was the end of an era for CNN Tonight with Don Lemon.”

Lemon pledged that more details about what’s next for him at CNN will come on Monday. It’s not clear if this may be due to another member of CNN’s television team leaving as Nicosia suggested.

CNN Tonight has been hosted by Lemon since 2014, and has aired live from 10:00 P.M. ever since, extending from one hour to two hours in 2019. It moved into the time slot after the cancellation of Piers Morgan Live, which itself replaced CNN’s long running show Larry King Live in 2011.

Don Lemon just announced that tonight will be his last show on CNN: pic.twitter.com/1o4c5xO8kO

Ps. It's not Don Lemon I'm talking about.

Hey everyone. Not what you think. I’m not leaving CNN. Tune in for the handoff on Monday at 10pE and I’ll explain. pic.twitter.com/oOwDferY2i