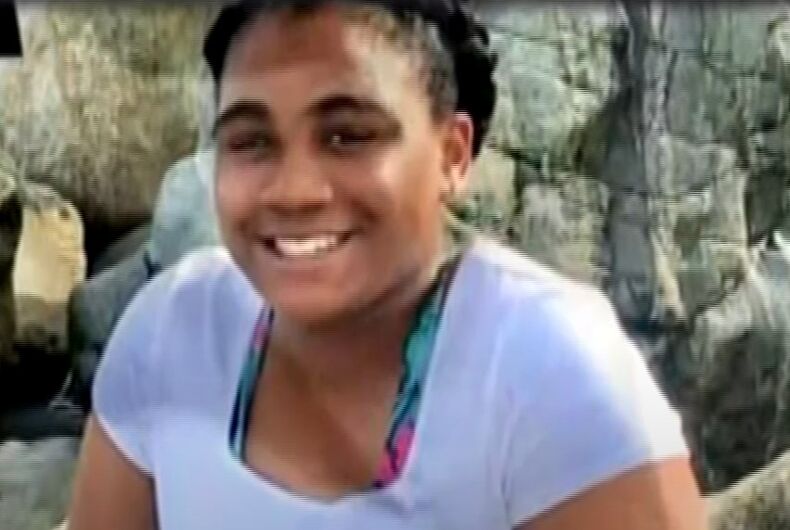 A Black teen was allegedly attacked by four or five other teens outside of her home in Massachusetts, prompting her mother to call police. Just over 12 hours later, the teen’s body would be found “bound by the neck with a black belt to a tree” a mile away.

Mikayla Miller’s mother and family now say that investigators are determined to deem her death a suicide, but they’re not buying it.

Miller was 16, a sophomore at Hopkinton High School in Hopkinton and a Black queer athlete in a predominantly white neighborhood.

Just hours prior to her death on the night of April 17 or morning of April 18, a group of either four or five other teens came to confronted Miller at a recreation room in her apartment building, leading to what’s described as a “physical altercation” between Miller and two of them.

Miller’s mother, Calvina Strothers, believes they came to “jump” Miller. A boy and a girl attacked Miller while one girl remained in the car and two others were nearby. Strothers indicated that Miller once had a romantic relationship with one of those girls.

The confrontation left Miller with a bloody lip and a bruises on her face, her mother said. Her mother called police, but the alleged assailants had left afterwards, and police said they would investigate.

That night, when Strothers was asleep, the teen left the home, and her phone showed that she walked close to a mile of distance, which is about how far she was from home at the time of her death.

It’s not clear what happened to her after, and a jogger would discover her body at 7:45 A.M. the next morning. When Strothers was notified, police told her that it was clearly a suicide. Now, investigators are denying that they jumped to that conclusion prematurely.

Since then, many have been pushing publicly for answers. Among other politicians, Sen. Elizabeth Warren (D-MA), Rep. Ayanna Pressley (D-MA) and former Boston city councilmember Tito Jackson have criticized the handling of the investigation. Many advocates expressed that the Hopkinton Police Department and Middlesex County District Attorney’s office is incapable of objectively investigating the case.

Strothers broke her silence this week, first on Facebook on May 4, and then at a protest on May 6.

“The police only questioned one girl and no one else. Later that night Mikayla was lured outside by one of them (I believe),” Strothers wrote. “Despite requests from my attorney and the Boston Globe, the police are not releasing any information at all but are trying to rule this as a suicide.”

“My daughter was not suicidal. I need your help in bringing attention to this situation so that this will not swept under the rug,” she wrote in a Facebook page post demanding “Justice for Mikayla Miller.”

Hello, my name in Calvina Strothers, and I am writing this post to get to justice for my child Mikayla Miller who was 16…

Posted by Justice for Mikayla Miller on Tuesday, May 4, 2021

In a statement made on May 5, the District Attorney’s office said they “confirmed the whereabouts of all five teenagers involved that interacted with Mikayla the night prior to her death and have confirmed their locations later in the evening.”

“Let me make one thing clear: nothing can bring back Mikayla or console her grieving family. But what we can do – indeed what we owe her – is an accurate and fulsome [sic] accounting of what led to her death,” District Attorney Marian Ryan said. “You have my word as your District Attorney and as a mother, that I will deliver that answer. But the public must give us time to find the answers.”

Results of an autopsy are still pending “and no final conclusions have been reached,” Ryan claimed.

Strothers has refuted certain information released by Ryan’s office in steps to prove their transparency. Ryan’s office said that “allegedly traveled a distance of 1,316 steps” after 9:00 pm on April 17. Strothers said that her daughter’s phone “was not an active cellular phone. It didn’t have cellular data,” meaning that “the only way that it could work as if it was connected to WiFi.”

“Once leaving the community, she no longer has WiFi there, so her steps can’t be cannot be counted, which I confirmed with Apple,” Strothers said at a protest on May 6.

She adds that despite the office reporting that they spoke to all five teens that were there when Miller was attacked, that “almost a week [after her death], when I requested a copy of the police report, it was nothing on file or in the Hopkinton police log. There was also none of the actual findings of Mikayla’s body.”

Ciara Dior, Miller’s cousin, said, “they don’t want us to come in numbers demanding answers. They want to cover it up by calling it a suicide… Let me tell you something, my family is huge and we don’t play when it comes to our family. We won’t stop until we get justice!”

According to the Daily Beast, Dior described Miller on Facebook as as a “sweet, intelligent, talented, and a loving young lady” who “had plans to go to an HBCU, [because] she was a talented athlete who loved to play the game of basketball.”

At the press conference, Ryan and her office refused to say what they believe a possible motive or cause of death could be, but were quick to dismiss any claim that Miller was targeted for being a LGBTQ person.

A GoFundMe fundraiser for Miller’s funeral has raised over $18,000 in under two days.

"She was my bright and shining star in this crazy world." ❤️

Mikayla Miller's mother spoke for the first time last night at a vigil to remember the Hopkinton teen who was found dead last month –> https://t.co/hDBvQ16cOs pic.twitter.com/6xq3xmvutX

Mikayla Miller’s death was a tragedy. Her family deserves peace in knowing that everything possible was done to find answers, including a thorough and transparent investigation.https://t.co/kSFjApXCEb

Mikayla Miller deserved to grow old. She had so many basketball games, road trips and HBCU homecomings ahead of her. She deserved childhood — uninterrupted.

There needs to be a full, transparent, independent investigation into her death.

#BlackLGBTQLivesMatter: NBJC mourns the loss of #MikaylaMiller, a Black 16-year-old girl and member of the LGBTQ+ community, found dead, hanging from a tree one day after her mother said she was jumped by a group of 5 white teenagers. 💔

The difference is stark between the Republican agenda versus Democrats’ priorities