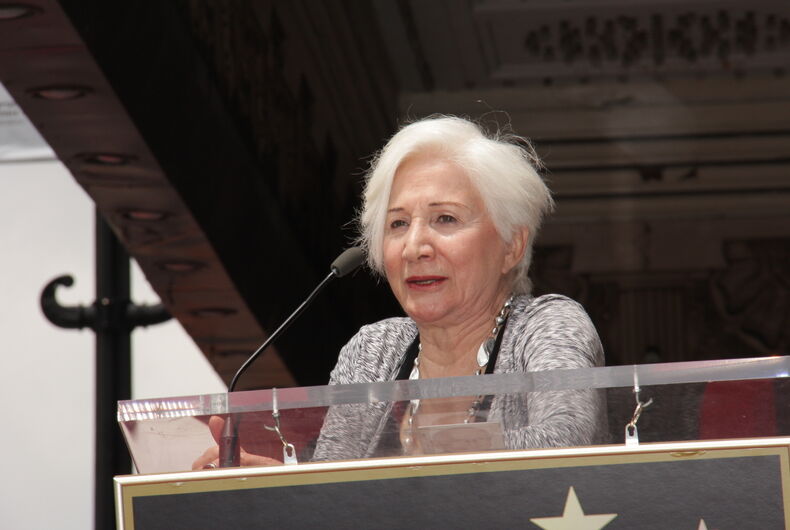 LOS ANGELES - MAY 24: Olympia Dukakis at the ceremony bestowing her with a star on the Hollywood Walk of Fame.Photo: Shutterstock

Author Armistead Maupin has joined the chorus of fans who are paying tribute to Olympia Dukakis, the pioneering actress who brought trans landlady Anna Madrigal to life when his Tales of the City novel became a television series.

“She was my fierce friend and beloved muse who swept into my life almost thirty years ago,” Maupin said in a statement on social media about Dukakis, who passed away in New York City on May 1 at age 89.

“She could cuss like a sailor and love like an angel and weep for you in sorrow and in joy,” he said. “There was no one like Olympia. I’ll see you in the stars, old girl.”

Dukakis, who had been in failing health, became one of the first actresses to portray a trans character on American television when she took on the role of Anna Madrigal, owner of the fictional apartment building at 28 Barbary Lane that housed an eccentric roster of residents. Dukakis reprised the role three more times, including a 2019 Netflix miniseries in which her character died.

The original Tales of the City was turned into a television miniseries that was produced in 1992 by Channel 4 in the United Kingdom and aired on PBS in 1993, with Dukakis as the marijuana-growing matriarch who was born a man and transitioned. The name Anna Madrigal is an anagram for A Man and a Girl.

Dukakis brought warmth and wittiness to Anna Madrigal that made her one of the most beloved characters in the cast, reflecting the way Maupin depicted her in his book. She played Anna Madrigal on follow-up series that aired in 1998 and 2001 on Showtime as well as on Netflix.

In the 2019 sequel on Netflix, Anna Madrigal dies in her sleep after taking steps that ensure the future of the Barbary Lane boardinghouse, and the finale is an emotional tribute to her. Dukakis, then 87, was one of the only actors to appear in all four televised versions of the story, along with Laura Linney, as Mary Ann Singleton, and Barbara Garrick, as DeDe Halcyon-Day.

Before the Netflix series was broadcast, there was some question whether a cis woman should play a trans character. The producers had hired a mostly queer cast and crew and included ripped-from-headlines plot points involving LGBTQ issues, but they said they wanted Dukakis to reprise her groundbreaking role as Anna Madrigal.

“Having Olympia was critical to making the show again,” executive producer Alan Poul told Vanity Fair in 2019. “Olympia is clearly grandfathered in and paid her dues.” Poul noted that Dukakis made a “very bold” decision to play a trans character in the 1990s, a decade when there weren’t many trans characters on the air: “Olympia has clearly earned the right to finish out the role.”

Casting a trans actress to play an aging Anna Madigral in the Netflix reboot could have raised its own set of issues, Poul continued in the Vanity Fair interview. “If we had recast the role with a trans actress who could play a 90-year-old woman, there would have been an enormous uproar,” he said. “That would have been a huge act of disrespect and sacrilege on the part of the fans, whom we owe a lot.”

“I love that we’ve got a trans woman playing the young Olympia,” Maupin said. “The pioneering that Olympia did has led to the hiring of a trans actor, who’s amazing…I don’t think anyone who knows the original would begrudge Olympia her cisgenderness, because she’s been so sympathetic to the project all along.”

When Dukakis took the role in 1992, “no one else would touch it,” Linney said in an interview on KQED radio. “What she was able to do for the trans community then is something that had not been done before.”

In addition to her Tales of the City roles, Dukakis won a Best Supporting Actress Oscar in 1988 for her role in Moonstruck, the same movie for which Cher won a Best Actress Oscar.

She also had key roles in Steel Magnolias, Look Who’s Talking and Mr. Holland’s Opus, often playing a tough-talking woman with a heart of gold.  In Steel Magnolias she was Clairee Boucher, digging for gossip with the one-liner: “If you don’t have anything nice to say about anybody, come sit by me!”

Known for her work on behalf of women’s rights and the environment, she was a cousin of Michael Dukakis, who ran for President in 1988, and introduced him at the Democratic National Convention. She called 1988 “The Year of the Dukakii” because they were both in the limelight that year.

Olympia Dukakis Was an Amazing,Academy Award Winning Actress.Olympia Played My Mom In Moonstruck,& Even Though Her Part was
That Of a Suffering Wife, We😂ALL The Time.She Would Tell Me How MUCH She Loved Louis,Her”Handsome Talented,Husband”.I Talked To Her 3Wks Ago. Rip Dear One pic.twitter.com/RcCZaeKFmz

Wrote This Hrs Ago,But Didn’t hit Twt😔.Heard Olympia Was Sick So Called Her Daughter & Said Could I Talk 2 Her.She Said
“She might Not HEAR or SPEAK”.I Called In2 The Receiver”Olympia It’s Cher,I ❤️You”.Remember Moonstruck,She Said
“oh cher,I❣️you”She Was Weak But Happy. RIP O

You never think about Friends,Loved Ones Leaving,But Thank God We Can See Them.

Olympia Was A Great Artist & Brought Immense
Joy To Anyone who was lucky enough To see her
Work her MAGIC.
Ppl Around The 🌍Will
Miss her😥.