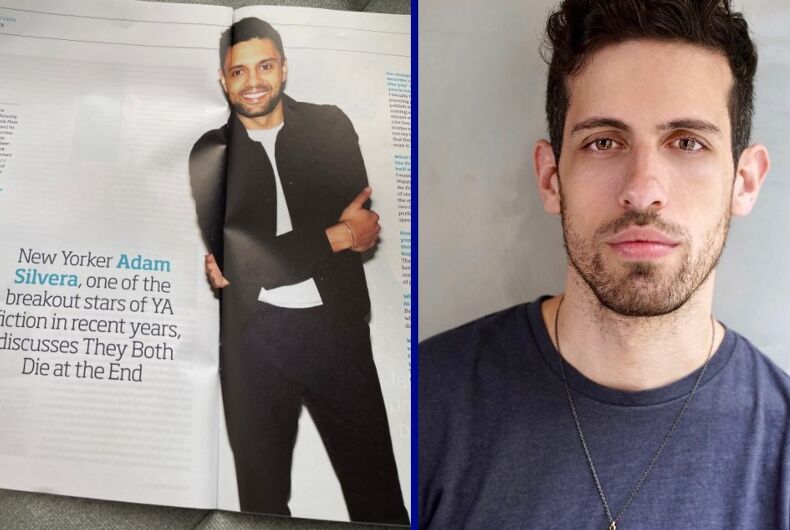 A magazine made a “humiliating” mistake when an interview of gay Puerto Rican author Adam Silvera was published with a picture of gay Pakistani author Mohsin Zaidi.

“This is… not Adam Silvera?” writer Juno Dawson wrote with an image of the article in The Bookseller, a publishing industry magazine. Silvera wrote They Both Die at the End, a critically-acclaimed novel that’s the source of an upcoming HBO series.

Last week’s edition of The Bookseller had an “LGBTQ+ spotlight” and included an interview with Silvera. But the photo that ran with the interview was actually a picture of Mohsin Zaidi, who wrote A Dutiful Boy, a memoir that draws from his experiences growing up gay and Muslim in the U.K.

This week's issue of The Bookseller is out now, an LGBTQ+ spotlight, with @tanyabyrne taking the front cover, opinions from @MattCainWriter and @mohsinzaidi_ldn, author interviews, previews, charts and MORE!

“It is humiliating to have written a piece in the very same issue about the gatekeepers of the book world, the power in giving diverse voices a platform and thanking the industry,” Zaidi wrote in a statement.

“Minorities are not window-dressing, which is, unfortunately, the distinct impression one is left with when a working culture fails to instill the importance of being able to tell the difference between someone who is South Asian and (a very talented) person who is Latinx.”

“What sucks about this The Bookseller business is that there’s no attention on the article itself which is highlighting the success of a story about queer Latinos by a queer Puerto Rican,” Silvera wrote on Twitter. “Really hope The Bookseller can make this right.”

What sucks about this The Bookseller business is that there's no attention on the article itself which is highlighting the success of a story about queer Latinos by a queer Puerto Rican. Really hope The Bookseller can make this right.

Bookseller editor Phillip Jones said that the mistake was his fault, not the interviewer Matthew Todd’s. He offered to run the article again with the right photo and said that the online version had been corrected.

In the profile, Silvera discussed not having many books growing up that told stories from a gay perspective and that he also felt the pressure to write about straight people.

“I literally found myself writing straight narrators when pursuing publication,” he said. “I didn’t know we were allowed to publish stories with queer narrators because I wasn’t coming across them.”

“My career would be a lot less revolutionary if I had just added more straight stories to shelves already overflowing with them. That’s not my truth and not a story I’m bursting to tell. I wish that freedom and joy for every marginalized writer, if they want it.”

J.K. Rowling event gets canceled at book fest because of her anti-trans statements