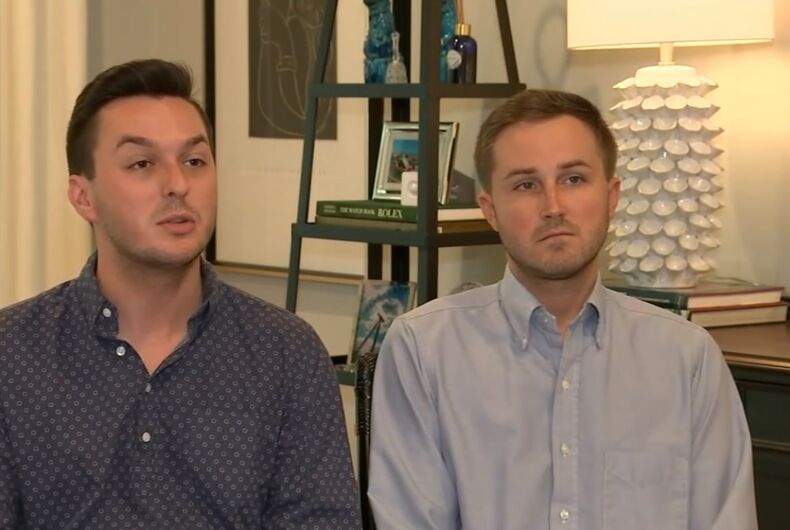 A North Carolina gay couple began planning their upcoming wedding, and contacted a nearby wedding venue to inquire about holding the joyous event there.

The wedding venue told them they “have chosen not to participate in same-sex weddings at this time,” citing their “Christian values” and even going so far as to say that they’re the real victims of discrimination here.

McCae Henderson and Ike Edwards live in Raleigh and their wedding is planned for April 2022. They came across Highgrove Estate, a full-service wedding planner and estate in Fuquay-Varina, North Carolina.

When Henderson and Edwards began to fill out the estate’s intake form, they noticed something was off. There was only a “bride” and “groom.”

“In the notes section I just said we were a groom and groom,” Edwards said. “It’s not like we can ignore that and then show up.”

But Henderson, an attorney, and Ike, a dentist, would not get that far with Highgrove Estate. Two days after submitting the form, the wedding venue — which dubs itself “the best of Southern hospitality” — responded by saying they “have chosen not to participate in same-sex weddings at this time.”

Henderson and Edwards were dismayed, and now that they’ve shared their story, so are many others.

“This is us. We are gay and we did not choose to be gay,” Henderson told ABC 11. “The fact that we don’t have access to things other people do is discrimination in my eyes.

The estate has since stood by its decision, claiming that while they’re happy to serve or “welcome” vendors, guests and employees of all orientations, they “believe in the sanctity of marriage.”

“Highgrove has always welcomed vendors, guests and employees of all orientations and we do not discriminate against a people or group,” their statement read. “We believe in the sanctity of marriage as God says in the Bible that marriage is between a man and a woman and we choose to honor Him above what the world decides what marriage should be.”

They also compared their decision to ban LGBTQ couples to the people online that are trying to critique them.

“We have been respectful and kind when letting them know we are not the best fit for them,” they wrote. “When magazines and others chose not to do business with us because of this position, we respected that decision. That is their right. We do not judge them or retaliate because they chose to not respect our religious beliefs.

“The argument can just as easily be the same for us as we’re being made to feel like the other. We are not the ones attacking, slandering and threatening others for their beliefs.”

After posting their statement online, many of the social media pages for Highgrove Estate were made private or were removed. Before that, they reported that at least one couple has withdrawn their wedding from the venue and they received a threat that they passed on to applicable law enforcement.

Currently, North Carolina does not include discrimination on the basis of gender identity or sexual orientation in their anti-discrimination statutes, and local municipalities have just regained the ability to change those regulations in their city or county. This was the result of a “compromise” that led to the repeal of the 2016 bill H.B. 2, known as North Carolina’s “bathroom bill.”

Lawmakers in the North Carolina legislature are not eager to pass any pro-LGBTQ legislation.

“I just feel like we got too many laws and too many rules, and government is too involved in our lives,” state Sen. Jim Burgin (R) told ABC 11. “I think we’ve got to, as lawmakers, we need to be very careful that we don’t overstep the whole idea of personal religious freedoms and opportunities to live life unencumbered by government.”

Just late last year, a lesbian couple was also denied consideration to host their nuptials in a Winston-Salem, NC wedding venue. That venue doubled down on its position: “We will allow anyone of any color, race, religion or belief to use our venue at any given time. Although we love and respect everyone in our community, there [sic] own decision making and beliefs, we also strongly believe in our christian values.”

Henderson and Edwards became engaged on Valentine’s Day, they report, and they are “committed to putting this chapter behind and looking forward to their big celebration” next year.

They add that they are “moved” by the support.

How strongly does President Biden support LGBTQ rights? We asked the man who knows best.