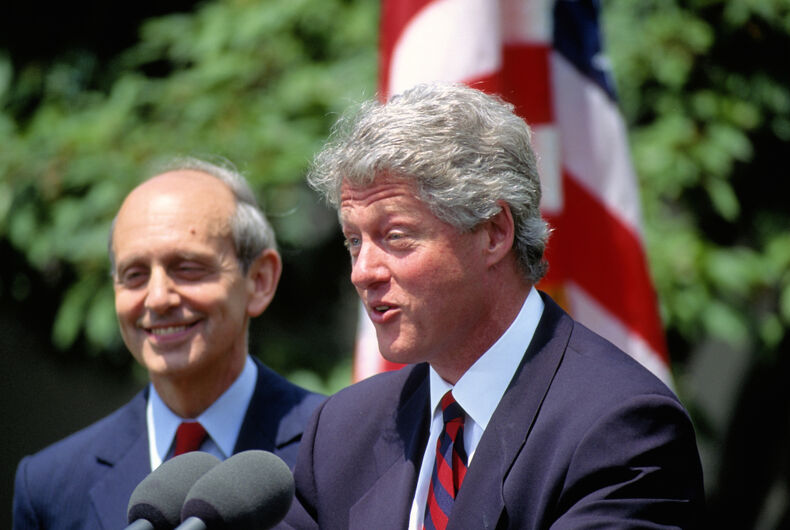 Washington DC., USA, 13th May,1994 President William Jefferson Clinton introduces Stephen Breyer as his choice for the next appointment to the United States Supreme CourtPhoto: Shutterstock

U.S. Supreme Court Justice Stephen Breyer has been in the news a lot lately. Breyer, who turns 83 in August, was nominated by President Bill Clinton back in 1994 and is by far the oldest of the three liberal justices on the Court.

As soon as President Joe Biden won the 2020 election and Democrats secured control of the U.S. Senate this past January, there were immediate calls from many for Justice Breyer to retire and allow someone younger to take over the role.

Related: Republicans are discovering that sports is a political game

After all, the Supreme Court just took up their first abortion case since Justice Ginsburg’s death with a new 6-3 conservative majority. With voting rights restrictions being passed in state legislatures around the country, they will soon face legal challenges that SCOTUS will almost certainly be considering.

To so many constituencies across America- LGBTQ+ people, women, people of color, union workers and so many more, the future of the Court is an absolutely critical priority. We simply can’t allow the right-wing advantage to grow even larger.

The current Democratic control of Congress is extremely tenuous. In the House, a body of 435 members, the advantage is only six; in the Senate, the body of 100 which votes on whether or not to confirm members of the Supreme Court, the gap is literally one vote. That means that at any moment if a Democratic Senator were to die, become incapacitated, or be forced to resign for some other reason, control could revert back to the Republicans.

In addition to that, the 2022 midterm elections are really not that far off; while it’s hard to say right now which party will win, past election results indicate that the odds favor the party out of power, in this case, the GOP, retaking command. That, in addition to the one seat majority, means that we only have a very brief and uncertain window that we need to take advantage of.

Biden has promised that he’ll appoint the first Black woman to the Court if he gets the chance. With all the racial strife and legal challenges with voting rights, this would be an incredibly timely opportunity to allow a new generation of diverse leaders to have their moment to shine. We need people at the top levels of politics and the judiciary who understand on a personal level the challenges in the country right now on race, gender, and minorities overall.

The other day Justice Breyer made comments in opposition to the idea proposed by progressives of expanding the court, saying that it would make the institution more partisan. If he wants to ensure there’s no, as Republicans like to call it “court packing”, then I respectfully urge him to retire now. Otherwise, we really will need to expand it if we end up with a 7-2 conservative majority.

I understand the reticence among some to call for Breyer’s retirement outright for fear that it could backfire. But we don’t have the luxury of playing nice. The clock is ticking.

This may be our only opportunity to prevent conservatives from shaping the nation for generations to come.