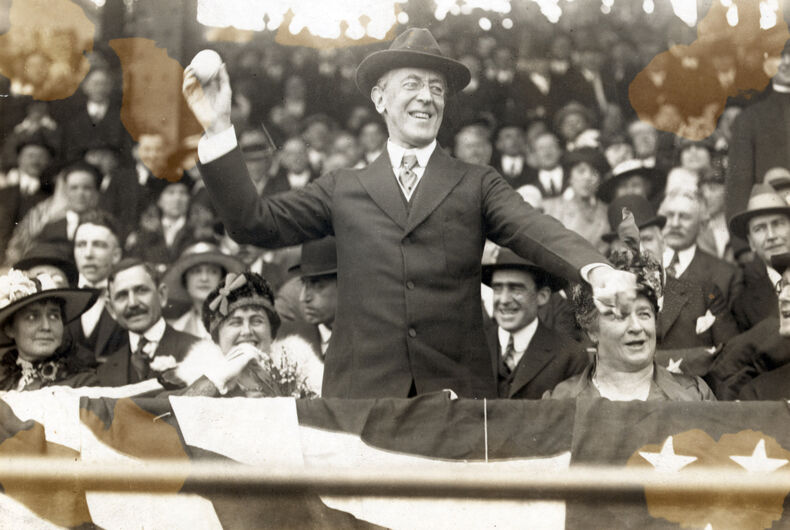 An ever-increasing number of athletes, sports teams, and entire leagues are taking a symbolic knee to lend their collective voices in support of the movement for #BlackLivesMatter and an end to two unequal systems of justice: one for white people and the other for black and brown people.

Related: Gay couple that adopted a baby they found in the subway tells their heartwarming story

Opponents to the Georgia law and others proposed throughout the country refer to them as “Jim Crow 2.0” signifying the prolonged period of U.S. history not so very long ago that included legal sanctions on the voting rights of people of color.

The MLB’s decision to relocate the All-Star Game follows other courageous actions in the world of sports to advance the cause of progressive social change.

The National Basketball Association (NBA) relocated its All-Star Game in 2017 out of North Carolina in reaction to HB2, a state law requiring people to use only restrooms that correspond with the gender assigned to them at birth, thereby prohibiting transgender people from accessing restrooms most closely aligning with their gender identities.

The owners of teams in the National Football League (NFL) voted in 1991 to withdraw the 1993 Super Bowl Game from Phoenix following Arizona voters’ failure to recognize Martin Luther King Jr. Day as a legal holiday.

I still clearly see in my mind’s eye the raised, black-gloved fists of gold medalist Tommie Smith and bronze medalist John Carlos soaring into the air during the track and field medal ceremony at the 1968 Mexico City Olympics. As the Star-Spangled Banner blared throughout the stadium, Smith and Carlos stood in salute to all the victims of injustice in the United States and throughout the world.

They both ascended the winner’s platform shoeless wearing black socks to highlight Black poverty. Representing Black pride, Smith wore a black scarf around his neck, and Carlos unzipped the top of his tracksuit in solidarity with all working-class blue-collar workers in the United States. He wore a strand of beads, which he declared, “…were for those individuals that were lynched, or killed and that no one said a prayer for, that were hung and tarred. It was for those thrown off the side of the boats in the middle passage.”

I watched the ceremonies from my university apartment with my roommates while tears of pride streamed down my face because they clearly demonstrated not only the political potential, but more importantly, the very political nature of sports to forever transform minds, hearts, and souls for the betterment of society.

Not everyone, though, supported their actions, stating that the purpose of sport is for entertainment only and not to advance a political agenda. Avery Brundage, International Olympic Committee president, scolded the athletes and the U.S. Olympic Committee for bringing domestic politics into “the apolitical, international forum [of] the Olympic Games.”

Soon following Smith and Carlos’ actions, the U.S. Olympic Committee suspended them from the team and barred them from the Olympic village. My university, however, gave them a heroes’ standing ovation when they returned to campus and honored the two athletes with a 22-foot high statue in 2005.

Anyone who asserts the “apolitical” nature of sports should ask former President Jimmy Carter why he chose to boycott the 1980 Moscow Summer Olympics following the Soviet Union’s invasion of Afghanistan.

Ask the athletes and spectators at the 2014 Winter Olympics in Sochi, Russia why they proudly waved rainbow flags and wore rainbow garments, held placards, and publically embraced and kissed others of the same sex as Russian authorities passed legislation and cracked down on so-called “homosexual propaganda.”

Ask historians whether Jesse Owens’ performance by winning four gold medals in track and field at the 1936 Olympics in Berlin, Germany seriously called into question Nazi “racial” political philosophy on the supremacy of the so-called “Aryan race.”

Ask the relatives of Jackie Robinson whether his very existence as the first black professional baseball player had political implications within the sport as well as the effect of opening and expanding opportunities for people of color in the larger society.

Ask boxer Muhammad Ali whether his opposition to the Vietnam War and the courage it took in refusing to comply with the military draft was political while negatively affecting his career when he was taken to jail and the sport rescinded his heavyweight national championship.

Ask Michael Sam his experiences over and above the field as the first out gay man recruited by an NFL team.

Ask Billie Jean King whether politics surrounded her win over Bobby Riggs in 1973 “Battle of the Sexes,” and her coming out as a lesbian – the first prominent woman athlete.

Ask Martina Navratilova as well about her experiences as an out lesbian on the professional tennis circuit. Ask Kareem Abdul Jabbar if his statements calling out systemic antisemitism was political in nature.

Ask Steph Curry when he spoke out following the murder of George Floyd to say he was fed up with police violence against Black Americans and the institutional racism that has been foundational since the inception of the United States had political underpinnings.

Ask Bubba Wallace, Nascar’s only Black driver in the top ranks, whether he forcefully and courageously convinced the organization to officially ban the Confederate flag in all its forms from future events.

Ask sports teams who refused to attend a White House reception under Donald Trump following a national championship whether that decision was political.

Perhaps, as time goes by and more pioneers break barriers, athletes’ very being may have diminished political implications, but, no doubt, sports has always been and will forever have political consequences and possibilities.

Let us not forget the political courage it took for Peter Norman, the white athlete upon the second-place platform along with Smith and Carlos in the Olympics, who spoke out in support of their action in the aftermath. For this, he faced social and professional ostracization once he returned to his native Australia.

The NFL recently apologized for not supporting the movement among its players, led by Colin Kaepernick, that took a knee protesting police violence against people of color.

Speaking truth to power and challenging injustice, while granting individuals the ability to maintain their personal integrity, also often comes with risks: social, professional, and physical.

But that is what defines a hero.