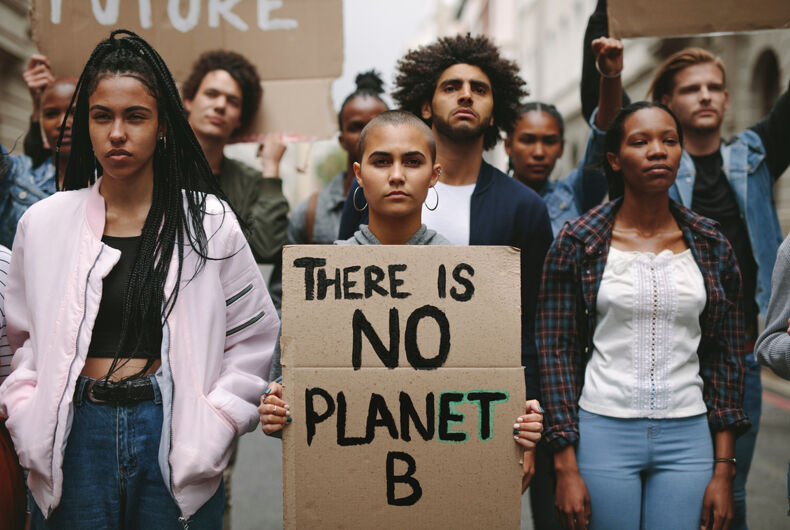 At a two-day virtual summit with world leaders, President Joe Biden (D) made it clear: climate change is a critical priority for his administration. Reducing carbon emissions to save the planet is a necessity for all of humanity, but a politically charged one.

And, as with all things political, LGBTQ issues are wrapped up in the debate.

Progressives, especially younger LGBTQ activists, see climate change as a defining issue for their generation, one that is invariably entwined with the fight against racism, sexism, homophobia and transphobia.

“As queer people, our existence is powerful,” Noah Goodwin, a GLAAD campus ambassador, wrote in 2019. “When we came together from seemingly disparate communities to fight, we created a force united in liberation. We can do the same in the fight against climate change. The time to act is now. There is no Planet B.”

At least some research suggests that climate change can disproportionately harm certain members of the LBGTQ community. A paper published by the U.S. Department of Agriculture (USDA) about climate change and indigenous peoples states that “for genders most frequently subject to oppression in the United States, such as women, and transgender and other gender nonconforming peoples, climate change may have more significant impacts.”

Indeed, a report from the Federal Emergency Management Agency (FEMA) released in the waning days of the Trump administration admits as much. In its last annual National Preparedness Report, FEMA for the first time acknowledged that LGBTQ people are “more likely than others to be severely impacted by disasters.” The report was the first time the agency acknowledged the potential impact of disasters on LGBTQ people.

While having any acknowledgment of LGBTQ people was a departure for the Trump administration, the report did carry through on one of Trump’s political goals: it never mentioned climate change, even though its presence loomed large in the report as a root cause of natural disasters.

By contrast with the current administration, conservatives sees climate change as a hoax perpetrated by elitists to undermine a traditional way of life. Of course, LGBTQ people are caught up in the fact-free attacks and delusional conspiracies that are part and parcel of the right.

Tony Perkins, head of the hate group Family Research Council, sees LGBTQ rights and climate change as part of a vast conspiracy by elites trying to end the human race. When a caller to his radio show complained that “the anti-life agenda” included LGBTQ rights because it meant an end to human reproduction, Perkins was quick to agree.

According to Perkins, “climate change alarmists and those who are pushing population control” actually “promote homosexuality” because “there’s no procreation there.”

Then there’s the long tradition of blaming LGBTQ people for any natural disaster. Kevin Swanson, a pastor known for his “death to gays” rhetoric, blamed 2017’s Hurrican Harvey on Houston’s embrace of LGBTQ rights.

Even right-wing figures who disagree with such sentiments still won’t acknowledge the science. “I don’t believe Hurricane Harvey is God’s punishment for Houston electing a lesbian mayor. But that is more credible than ‘climate change,'” Ann Coulter wrote at the time.

Of course, LGBTQ people are often the victims of those same natural disasters. After Hurricane Maria devastated Puerto Rico in 2017, CenterLink, the national association of LGBTQ community centers, started a fundraising effort to target LGBTQ residents struggling in the hurricane’s aftermath.

“LGBTQI people face disproportionate economic hardship (due to climate change),” Lee Dibben, a spokesperson at GiveOut, told the Thomson Reuters Foundation. “They’re not sat at the table and are being excluded from government decision-making.”

As governments around the world step up their efforts to curb climate change, it will be interesting to see whether that exclusion begins to fade.