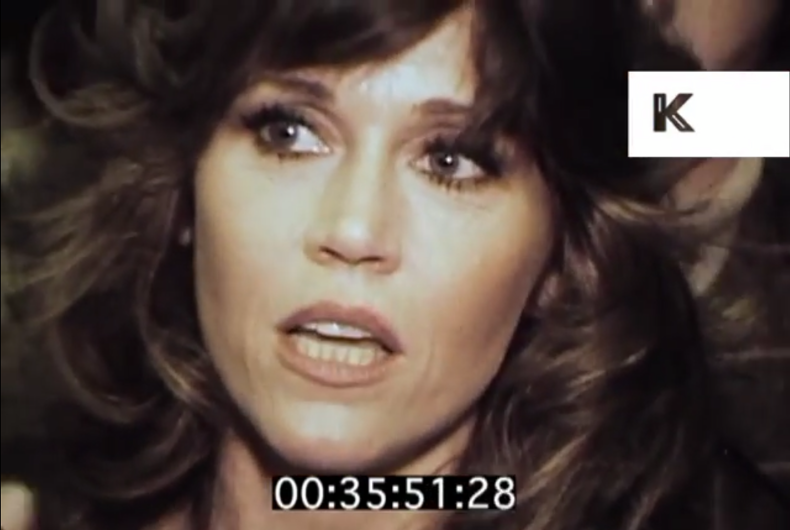 Jane Fonda, speaking to an interviewer in a video recorded in 1979.Photo: Screenshot / YouTube

An interview with actress and activist Jane Fonda in 1979 shows that her allyship with the LGBTQ community started decades ago, long before it became an important issue for other mainstream celebrities or activists.

In the short clip from the Kinolibrary Archive Film Collections, Fonda tells the interviewer at an event that gay and lesbian people were  “absolutely” discriminated against.

Related: These drag queens pound the pavement to serve entertainment and food at your doorstep

“Culturally, psychologically, economically, politically – gays and lesbians are discriminated against,” she says. “They are a very powerful movement, especially in San Francisco. They don’t need me, but… they like me!”

Fonda cited her organization, the Campaign for Economic Democracy (CED), as a strong resource for LGBTQ activists at that time. “Working together, we can be stronger than either entity is by itself.”

When the interviewer asks her if she believes that the community is “using” her or if she’s “using” them, she replies, “I hope they use me. What am I here for, if not to be used by good people for good things?”

“Everybody uses. The point is, what are you using for?”

It is believed that the interview came directly after the White Night Riots, in which the light sentence of Dan White – who had killed gay politician Harvey Milk, a friend of Fonda’s – led to days of protesting from the LGBTQ community.

When asked about the future of the LGBTQ movement, especially in light of “a lot of right people who don’t like the power of the gays,” Fonda responds that it’s “hard to predict” but adds that “all we can know is that, what this movement is seeking – which is nothing less than respect and justice, and stopping discrimination against people because of sexual preference – you’re on the side of the angels [supporting that].”

“If we’re going to survive as a world – and we may not – but if we do, they’re gonna win,” she concludes.

jane fonda was saying this in the 70s while some celebrities only manage to say "gay rights" today pic.twitter.com/qsGQlAeepK

The majority of the clip has been widely shared across Twitter in light of an interview published last week, Fonda spoke about working with “really young people” and having to learn to ask and respect their pronouns, instead of assuming.

“When you meet them, they give the pronouns that they go by. I’m going on 83. Do I really have to say what pronouns I go by, you know? The answer is yes and there’s a learning curve,” she told the New York Times.

The interview was an overview of many of the events and issues important to Fonda’s life and career. The two-time Oscar Award winner for Best Actress is publishing a book, What Can I Do?: My Path From Climate Despair to Action, on climate change and environmental activism. She talked about being re-energized by younger activists, namely Greta Thunberg, to continue her work such as leading the “Fire Drill Fridays” weekly protest in Washington, D.C. since 2019.

Watch the full 1979 interview clip below.

Who will be LGBTQ Nation’s Up & Coming Politician of the Year?