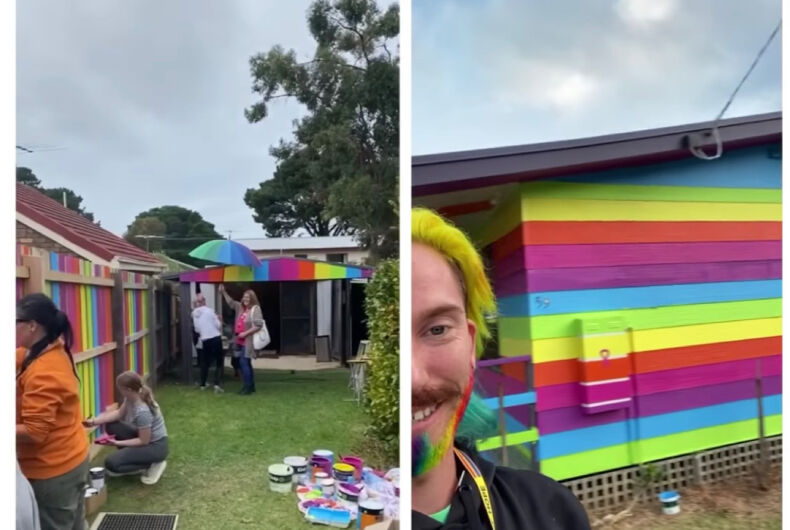 Mykey O'Halloran (right) documents as he and several community members paint his house and the exterior in rainbow colors.Photo: Screenshot/Instagram

Five men threatened their new gay neighbor to keep him from painting his house in the colors of the rainbow. But their plan backfired, helping him get over 100 supporters to help him paint his house. A Pride parade may be in the works, too.

Australian hair artist and out gay man Mykey O’Halloran moved to Phillip Island in Australia this past February to be closer to the ocean, seeking a “haven away from city life” in Melbourne. He is well-known for his rainbow hair color and coloring other people’s hair in the rainbow as well.

But the haven O’Halloran was seeking became the location of a homophobic outburst. After finding out that he planned to paint his house in rainbow colors, several men came to O’Halloran’s door in March.

“Five men came onto my property around twenty to ten at night and were yelling homophobic slurs and telling me not to paint my house rainbow. One even threatened to come back and kill me if I did paint my house,” O’Halloran disclosed after.

One man came over and “introduced himself as the homeowner from across the road,” and said “his reason for being at my house was to tell me not to paint my house rainbow.” He then allegedly said, “See what happens if you do.”

“It was really shocking and traumatizing and a total invasion of my personal space.”

Despite the threat, O’Halloran was not swayed against his plan, and he reported the incident to police. They arrested at least one person and charged him with unlawful assault and threat-making, according to the Star Observer.

Further, others around the community wanted to show that this behavior didn’t reflect them. So people offered to come from all over the Australian province of Victoria to help O’Halloran paint his home. When the time came, over 100 people did.

“People were outraged by what had happened,” O’Halloran said. “The incident has bought a lot of awareness to the fact that we need to show more inclusivity and support for the LGBTQI communities, to make everyone feel safe and be themselves.”

Paint company Dulux provided O’Halloran and his supporters with 11 gallons of paint in each color.

“At one point, there was definitely like about 60 people at once,” he shared in an interview with the Australian talk show The Project. “We definitely had over 100. It was hard to keep track of everyone all day.”

“It was an amazing result… I’m so overwhelmed with joy of how much love and support there is in this community.”

Now, O’Halloran is planning to organize the first Pride parade for the island of at least 7,000 residents. He launched a GoFundMe to begin the effort, alongside the Phillip Island Community and Learning Center (PICAL), which started a local “Rainbow Connect” group last year.

“This has really brought out the people in the community that are supportive and accepting, and it has shown me it’s a minority that holds those homophobic views and small mindedness,” he said.

One person that came to help out, “trans elder” Sally Conning, said, “O’Halloran asked if I was coming on Sunday, and I said ‘Yes, you bet yah.’ I got there yesterday, and the place was filled with such a good vibe.”

“Someone said yesterday that Phillip Island is a great little village, but even villages have their local idiots,” Conning recalled.