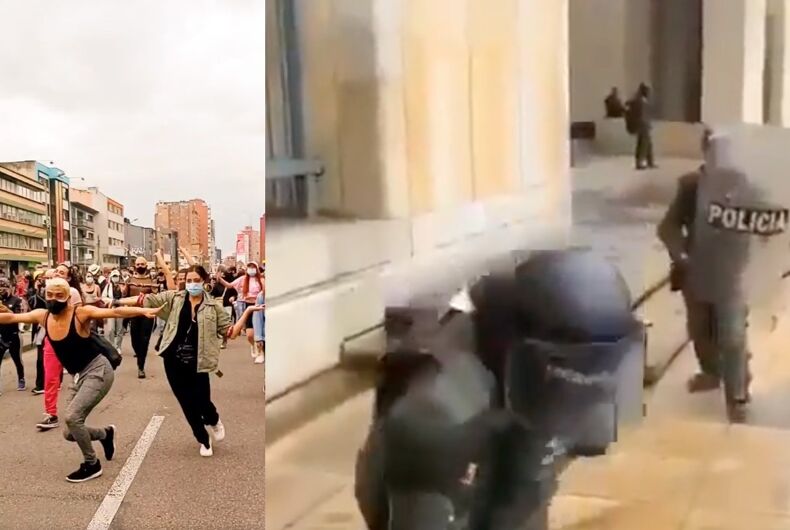 Video posted online shows transgender women vogueing through the streets of Bogota before being met by the police.Photo: Composite

As protests rock Colombia this week over tax reforms, LGBTQ people have led sizeable contingents through the streets nationwide.

Video posted to multiple social media sites showed queer activists vogueing their way to justice as part of a national strike yesterday that shut the country down. Trans women dancing in a plaza were met by police with riot shields in one video.

Protests broke out nationwide and both videos were reportedly recorded in Bogotá.

By mid-afternoon, the protests in Bogotá had turned violent as protestors set fire to a police motorcycle and the militarized police force shot tear gas into the crowd. Violence was also reported in other cities nationwide as residents took to the streets.

The Colombian protestors are angry about “the unpopular tax reforms, along with a number of other serious frustrations — from the progress of the peace process to environmental concerns,” according to the Bogotá Post. “After a year of closures, job losses, financial struggles, for many Colombians, the tax reforms are rubbing salt in the wound. Moreover, it has provided a rallying cry and focus for people’s COVID anger.”

A group of trans and non binary people voguing as a form of facing the police, at today’s protest in Colombia from LGBTnews

LGBTQ people and especially trans women have faced outsized levels of violence recently in Colombia. A human rights report last year found hundreds of violent crimes against LGBTQ people in Colombia, including 63 murders in the first part of 2020 alone. Seventeen of those victims were identified as transgender women.

Marriage equality has been legal in the country since 2016 and courts have protected transgender people’s right to correct gender markers on their official identification.