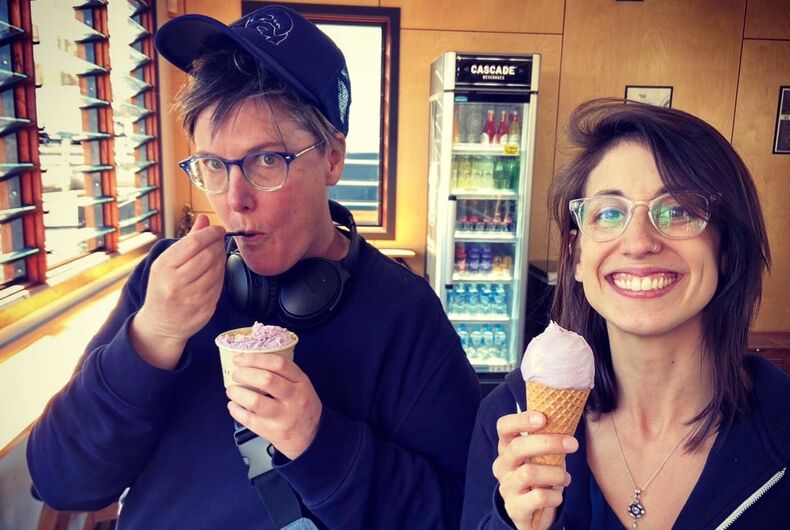 Lesbian comedian Hannah Gadsby, who gained stardom after the release of her award-winning Netflix special Nanette, announced Wednesday on Instagram that she got married in January.

“I would like to introduce all y’all to Jenney Shamash,” Gadsby wrote beneath a picture of the two of them eating ice cream.

“She is a producer extraordinaire. She is very funny and is really talented at reciting facts. It is a joy to behold. We got married in January and we are very chuffed about it.”

“For the record: this is me gushing. I am full of very positive feelings. This is a nice story. My heart felt thanks to everybody who voted for marriage equality.”

Australia legalized marriage equality in 2017. As the law was being debated, Gadsby wrote a passionate Facebook post condemning the need to debate at all.

“I don’t want young kids to hear the kind of horrific bile I was forced to listen to in the 1990s when Tasmania [the state Gadsby grew up in] debated on whether to legalize homosexuality,” she wrote.

“For many, the debate was theatre. For me, it made me hate myself so deeply I have never been able to develop an aptitude for relationships.”

In her comedy, Gadsby speaks openly about enduring homophobia throughout her life, which for fans, may make the marriage feel especially sweet.

Fans across social media rejoiced at the happy news, both congratulating Gadsby and thanking her for being an inspiration to others.

To Hannah and Jenney—

Congratulations. This is the bee's knees of news in 2021. So very happy for you both. May your lives together be full of love, friendship and contentment. 👩‍❤️‍👩💃💃 pic.twitter.com/iCCYTflnek

Congratulations!🎈🎊🍾 Beautiful wife, beautiful life is my motto. Never imaged when I was growing up I would be able to marry.