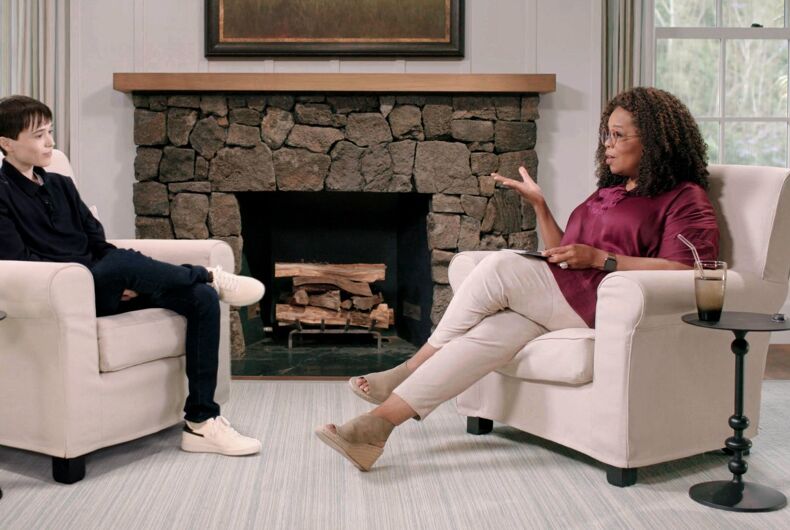 Oscar-nominated actor Elliot Page opened up with Oprah Winfrey in his first television interview since he announced his transition last year.

“What part of your transition has actually brought you the most joy?” Winfrey asked Page in the interview set to air on Friday on Apple TV+.

Related: A trans woman’s grandmother thanks Elliot Page for helping them by coming out: “I am proud”

“It’s the little… you know, getting out of the shower and the towel’s around your waist and you’re looking at yourself in the mirror and you’re just like, ‘There I am,'” Page responded.

“And I’m not having the moment where I’m panicked…. It’s being able to touch my chest and feel comfortable in my body for probably the first time.”

He started crying. “Tears of joy!” he exclaimed.

During the interview, the Juno star talked about his struggles with mental health prior to transitioning, which included depression, anxiety, and panic attacks.

“It felt important and selfish for myself and my own wellbeing, and my mental health,” he said about his transition.

Page announced his transition in December, saying that his “joy is real, but it is also fragile.” He also said that he’s “scared of the invasiveness, the hate, the ‘jokes,’ and of violence.”

He told Winfrey in a clip that of the interview that Vanity Fair posted to Twitter that he needed to announce his transition publicly so that he could use his platform to help other trans people.

“And also with this platform I have, the privilege that I have, and knowing the pain and the difficulties and struggles I faced in my life, let alone what so many other people are facing, it absolutely felt crucial and important for me to share that,” he said.