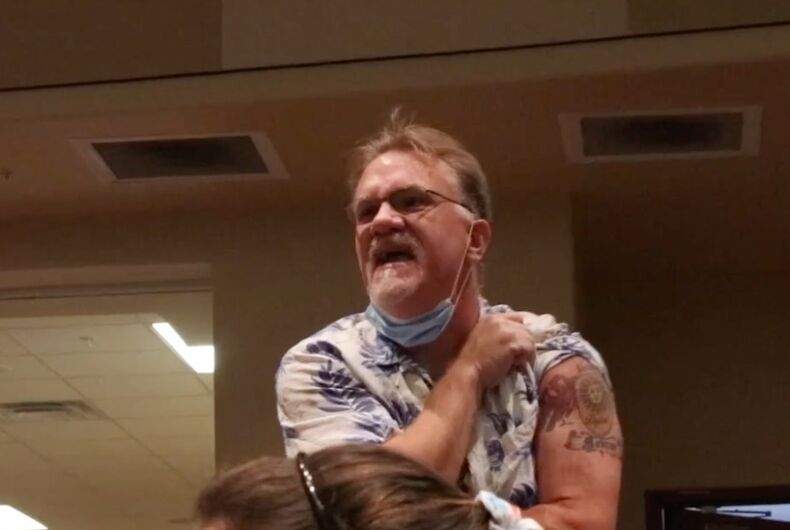 A Lee County School District board meeting brought hundreds of residents out to protest a policy that doesn’t exist. One man was hauled out by police after he refused to stop shouting about transgender students.

An educational poster from Equality Florida aimed at LGBTQ students kicked off the uproar after it was misrepresented and by this week’s school board meeting, the rightwing outrage machine had gone into overdrive.

Critics of the poster claimed that it instructed students to treat restrooms and locker rooms as unisex. It did not.

A previous meeting also drew hundreds of protestors upset about the poster. When they found out that the poster wasn’t made by the school or part of any authorized curriculum, their attention turned to the school district’s code of conduct for students.

The code of conduct is updated annually and there wasn’t any opposition when it passed earlier this year. The duped demonstrators insisted that the standard set of rules is “LGBTQ-focused.”

The district’s policies instruct school officials to make decisions about trans student’s accommodations on a case-by-case basis. They do not have a blanket policy that covers all students. The Florida High School Athletic Association sets the policies for trans inclusion in school sports and not the district.

That didn’t stop local resident Ryan Monroe from standing up shortly after the meeting started to proclaim that the board members needed to “keep boys out of the girls’ room!” Sheriff’s deputies had to remove Monroe from the room when he refused to stop.

During the meeting district staff updated the board on recent court decisions and state legislation that could affect the next code of conduct. It included information on transgender students.

The bulk of people who spoke before the board indicated that they supported protections for LGBTQ students.

One former student presented a petition from alumni and current students asking the board to create an “LGBTQ student advisory committee” to help the board parse out and implement policies that would most benefit queer students in the district.