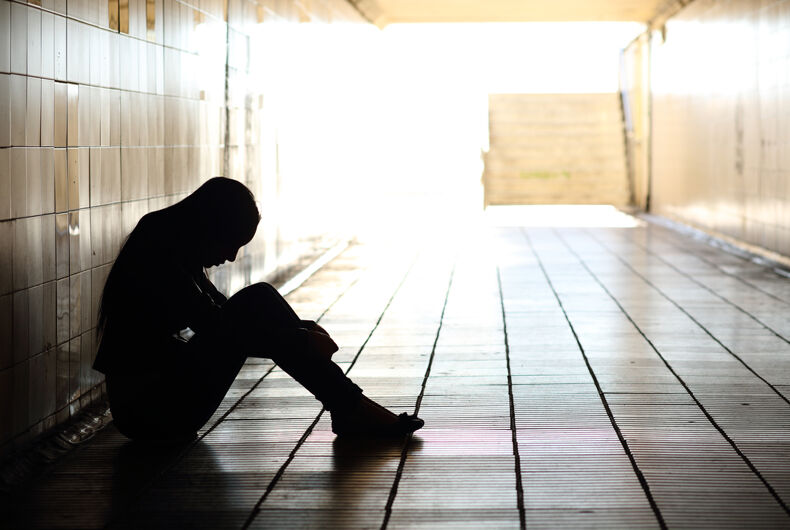 At least four transgender teens at one clinic in Arkansas have reportedly attempted suicide in the two weeks since the state banned gender-affirming health care for transgender minors.

“My families are in a state of panic, asking what state should they move to, saying their child is threatening to kill themselves,” Dr. Michele Hutchison told the AP. “They want to know what they should do next and we don’t have a clear answer for them.”

Related: Tearful mom begs Texas lawmakers not to throw her in jail for supporting her trans child

Dr. Hutchison would know. She runs a clinic that has helped 200 families in the state access age-appropriate medical care for transgender youth. Her clinic is the biggest provider of puberty blockers and hormone therapy in the state.

Dylan Brandt is a 15-year-old transgender boy who started testosterone several months ago. He and his mother said that he’s more confident and outgoing now.

But the state just passed a law banning doctors from providing gender-affirming care to minors. Gov. Asa Hutchinson (R) vetoed the bill, saying, “Government under a conservative philosophy should be restrained.” His argument was that doctors and families should be left alone to decide what the best health care option is.

The GOP-dominated state legislature overrode his veto, making it the first state to pass such an extreme anti-transgender law and it’s set to go into effect this summer.

“The thought of having to go back to how I was before this is just devastating because that would set me back on everything,” Brandt said. “I don’t want to go back.”

The law has already made transgender youth and their families afraid, and they’re looking for solutions. Brandt’s family can’t afford to move, but they’re close enough to the border with Oklahoma that they may cross state lines to get medical treatment because, Brandt’s mother said, ending his hormone therapy “isn’t a viable option.”

Dr. Hutchison is worried that families will also turn to the black market.

“They’re going to find a way to get them, and it’s going to be dangerous because they won’t be monitored for side effects,” she said.

Others may not have the resources to do even that.

“You’re basically kicking these people when they’re down,” Dr. Stephanie Ho said. She has cared for about a dozen trans teens in the past. “They have very little resources to begin with and now you’re going to make them choose between rent and their child’s life.”

One of the treatments banned by the law is puberty blockers, which are medications that delay the onset of puberty so that trans teens and their families and doctors have more time to figure out the best course of action before the permanent – and dysphoric – effects of puberty happen. They’re reversible if someone stops taking them.

The law also banned hormone therapy and other medical treatments for trans youth. While it also technically banned gender-affirming surgery, that is already not something performed on minors.

At least 20 other states are considering similar legislation and could follow similar paths to Arkansas.

Arkansas has already passed two other anti-LGBTQ bills this year, including a ban on transgender girls and women in school sports.

The other bill expanded religious exemptions for healthcare workers, a law that could make it legal for a doctor to refuse to provide care for LGBTQ people.

The religious exemptions law expands what health care providers are allowed to do under the law, while the gender-affirming healthcare ban restricts providers by threatening their licenses, insurance, and state funding if they provide treatment in accordance with mainstream science.

The group Doctors For Change released an open letter to the sponsors of similar legislation in Texas pointing out that the bill flies in the face of medical research and standards of care.

Arkansas is also currently considering a bill to block transgender people from using the facilities associated with their gender.

I became the first person to marry myself in 2015. How did I do during the COVID lockdown?