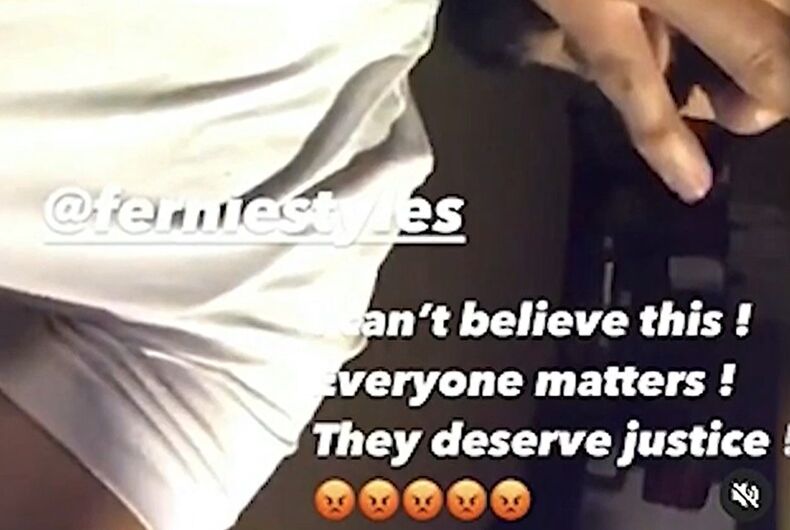 A gay couple in Phoenix says that they were attacked at a local bar and that “people were laughing instead of helping” as they were beaten.

“Tonight, everybody knows that it was Fernando’s birthday and my anniversary, so we went downtown,” Rudy Haro said in a video posted to Instagram. “Me and my man got attacked by a lot of straight men tonight.”

The West Valley NAACP and the Arizona Unity Collective held a press conference this past weekend to call for the restaurant to apologize to the couple and to release video footage of the attack. They also said that police should investigate the alleged assault after they were initially dismissive of it.

“What happened here is a travesty. It needs to be taken care of appropriately,” says Kenneth Smith, who’s affiliated with both the Arizona Unity Collective and the NAACP, at the press conference.

“One of the guys who assaulted us did have a gun he was trying to pull out until my friend started screaming for help. People were laughing instead of helping,” the Instagram video’s description said.

Haro and his partner Fernando de los Reyes Lugo went to the Golden Margarita restaurant and nightclub last Monday. De Los Reyes Lugo went back to the car with a friend to get their ID and Haro went in to order drinks.

That’s when the same person said: “They don’t do that gay [expletive] here.”

According to Sarah Tyree, criminal justice chair for the West Valley NAACP, that’s when Haro got pushed out of the nightclub, and he didn’t even know who did it. He was hit in the head. When his partner came back from the car, he was attacked too.

The Instagram post, which appears to have been deleted, said that Haro’s head was swollen. De los Reyes Lugo’s face was swollen and he was left with a possible fractured nose.

The men called the police and said that security at the club “failed to protect them.” But the four Phoenix police officers who showed up were allegedly dismissive of the attack.

The Golden Margarita posted a statement on social media saying they “sincerely apologize” for the attack but that it occurred on the sidewalk across the street from the nightclub.

“Here at The Golden Margarita we are big on having an open environment welcoming all people from all walks of life,” the statement said. “We do not and will never discriminate against anybody, either it be for their sexual orientation or racial background,

One witness, Kaitlyn Kavanaugh, lives in an apartment above the nightclub, and she said that she was woken up that night by the sound of screams in the street. She said she saw a man lying on the pavement and the police eventually show up.

Sgt. Mercedes Fortune, a spokesperson for the Phoenix police, said that the men were provided medical attention at the scene but that they couldn’t give enough details to determine exactly what happened.

Fortune said that one of the men pointed to a woman and said she attacked him. According to police, the woman accused Haro of standing in a private party area and refusing to leave. She said that she didn’t hit anyone.

“What are the Phoenix police doing about this? Why are these cases being dismissed or not being handled as aggressively as they should be?” he said.

Fortune said that no arrests have been made but that the attack is being investigated by the hate crimes unit.