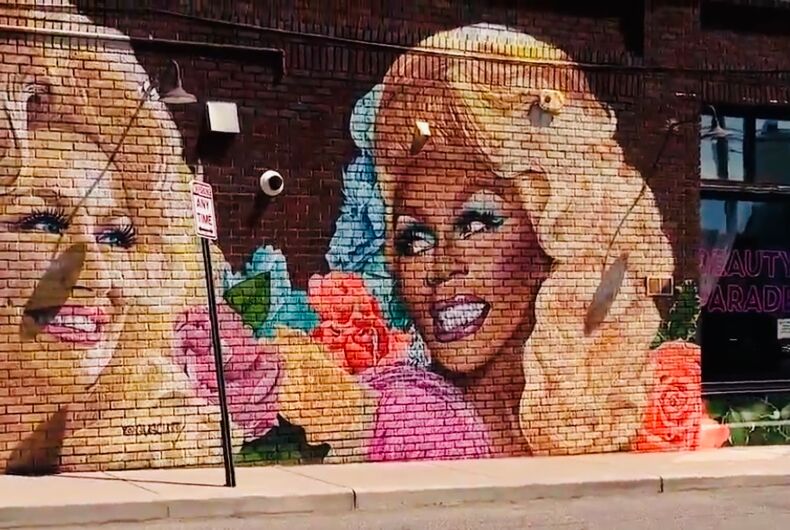 A mural of legendary entertainer Dolly Parton has been on the side of a hair salon in West Asheville, North Carolina since at least 2018.

Last month, Gus Cutty, the muralist, was bought in by the owner to add a new face alongside the “Jolene” singer-songwriter. This week, it was revealed that her now mural co-star was none other than RuPaul.

The Beauty Parade salon and owner Terra Marshall have been teasing the mural update for weeks.

“We get at least 10 visitors a day, probably upwards of 50 or 60 during the weekends,” Marshall said. “So the new addition is definitely going to bring probably even more.”

All kinds of guesses were being thrown online before the salon dropped a sneek-peek of the mural-in-progress. Kenny Rogers, Tammy Wynette, Loretta Lynn, and even Lil Nas X were some suggestions.

The Dolly Parton mural in West Asheville is getting an addition. Who do you think it will be? https://t.co/MNv6Wmwzkw

#Repost from @gsocialmedia .Exciting times as Spring just broke and new things are happening. Here is the new street…

Marshall originally had the larger-than-life display of Parton put up in 2018, and it was a huge hit even though Parton isn’t from the Asheville area.

“I have loved her for years,” Terra Marshall, owner of Beauty Parade salon, said. “And I am just inspired by how wonderful she is to the community and what a great human being she is.”

Cutty said it took four days of “workin’ 9 to 5” to complete Parton originally, using just a picture on his phone for reference.

“I’m a huge fan of like young Dolly, so I was going for that,” Cutty said. “Really wanted to capture the flavor of her earlier music.”

“Just really going for, like, the southern look,” he added.

In the meantime, this brand new Dolly Parton mural in West Asheville by artist Gus Cutty has been getting a lot of love. #avlart #avlnews pic.twitter.com/EQLfv3Rpvr

Once it made it to RuPaul’s attention, he first responded on Twitter, “Gorgeous! I hope it’s real.” After he learned it was, he shared it on Instagram.

The two have had a public friendship for quite some time, with the pair in conversation with each other publicly in 2016 and 2020.

In a joint interview in 2016, Parton was with RuPaul when she said, “I always said if I hadn’t been a woman I would have been a drag queen.”

“I was not born a natural beauty, nor was Ru, but I think we’re both beautiful in our own way.”

In a December 2020 Marie Claire series, RuPaul interviewed Parton and Parton said, “I have to always stay ready – street ready, I always say. I have to keep my makeup on and keep my hair done. Like, when I’m in LA – I’ve told you about it – if it’s going to earthquake, if we get an earthquake, I’m not running out in the street looking like you look now.”

While Parton and RuPaul catch up often, Parton has only ever appeared on RuPaul’s longtime competition series twice, both in the form of video messages for contestants in Drag Race‘s season 12 finale and RuPaul’s Secret Celebrity Drag Race.

“Just to let everybody know we have asked Dolly Parton for eleven, twelve, thirteen years,” Drag Race judge Michelle Visage told HuffPost UK in January. “At the end of the day it’s scheduling, and it’s a very long day for these people.”

It's real mama ru. Can't wait to make you, this mural, and my hometown proud. Thanks from a little gay boy in Asheville. 💗 pic.twitter.com/elyxaipJr3

Singer Kehlani comes out as a lesbian on live stream