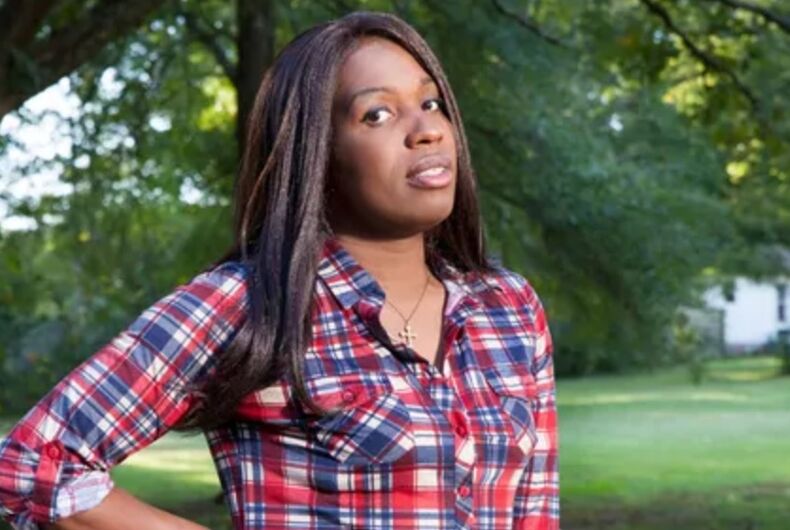 The Biden administration stood up for the safety of transgender women in a first-of-its-kind court filing, saying that it’s unconstitutional “cruel and unusual punishment” to systematically place trans women in men’s prisons and to deny gender-affirming health care to incarcerated trans people.

The Department of Justice filed a statement of interest in a lawsuit brought by Ashley Diamond against the Georgia Department of Corrections (GDOC). Diamond’s lawsuit, filed last year, says that men in prison sexually assaulted her 14 times and that she was denied hormone therapy because of prison policy.

The Biden administration agrees with her. In a statement of interest filing in the lawsuit, the Department of  Justice (DOJ) said that trans women face a “substantial risk of serious harm they face in men’s facilities,” which violates the Eighth Amendment’s ban on cruel and unusual punishment.

Federal law, according to the DOJ, requires prisons to take decisions about where trans inmates are housed on a case-by-case basis, taking their safety into account, which GDOC didn’t do in Diamond’s case.

“The failure to conduct individualized assessments that carefully consider the housing placements of transgender prisoners and take steps to mitigate their risk of sexual victimization, up to and including placement in a facility that matches their gender identity if necessary to provide reasonable safety, is contrary to evolving standards of decency,” the DOJ statement of interest says.

The DOJ also agreed with Diamond that she should not have been denied hormone therapy because “gender dysphoria is a ‘serious
medical need’ implicating the Eighth Amendment,” citing previous court decisions.

“If left untreated, gender dysphoria can result in psychological and physical suffering,” the DOJ said. “Prison officials violate the Eighth Amendment by failing to provide medical care” or inadequate medical care, like providing health care for everything but gender dysphoria.

Daimond’s lawyer Chinyere Ezie of the Center for Constitutional Rights told USA Today that she thinks the DOJ statement will help because it’s a “very persuasive authority for the court.”

“To our knowledge, there has never been such a clear statement about prison officials’ obligations to transgender people in their custody,” she said. “It’s going to be meaningful, not just for Ashley Diamond’s case, but to all people who are trans and incarcerated who are seeking just the bare minimum of constitutional rights that they’re entitled to.”

Diamond originally sued GDOC in 2015 for denying her hormone therapy. The prison system changed its policy on the matter when the Obama DOJ got involved.

She was released in 2015 on parole and was sent back to prison in 2018 on a technical parole violation. Both times she was incarcerated, she was put in men’s facilities.