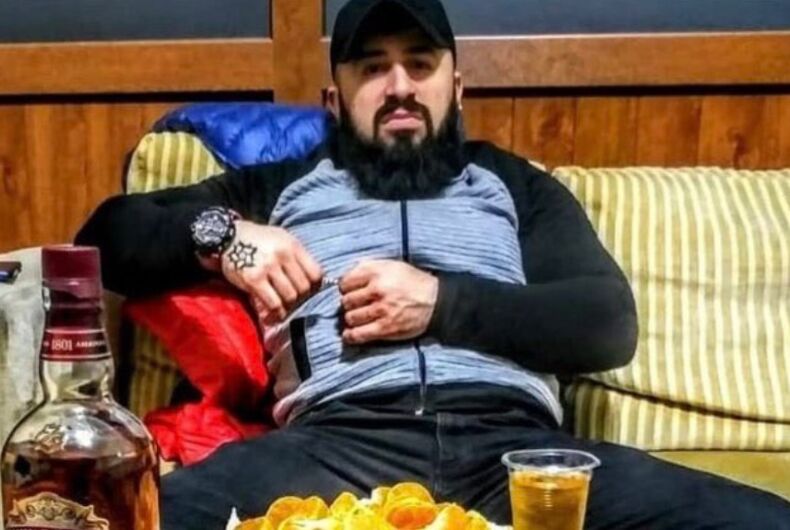 A Turkish man, believed to have previous convictions for several violent crimes, ran several posts on Instagram showing bloodied, beaten people that he and his associates apparently had kidnapped and assaulted. In the posts, he mocked one victim for being gay “pervert scum”

After several public posts online, police have finally bought the man into custody.

Firat Kaya, known as “Firat Delikanli” online, is reported to have been convicted of over 30 crimes, including extortion, fraud, and sexual abuse.

Kaya took to Instagram recently to share several photos of him holding up the heads of what appears to be several people he and others beat up, leaving some bloodied and limp.

One of his victims, Engin Elekci, who is gay and hearing impaired, spoke out about his ordeal. Kaya held a knife to Elekci’s throat in the photo he posted to Instagram. He also posted another video of Elekci with a bloody face, signing to another woman being held by Kaya and others.

The posts have now been taken down by Instagram, but not before Kaya’s acts made it across social media and a campaign was started to bring him to justice with the hashtag #FıratDelikanlıTutuklansın, which means “arrest Fırat Delikanli.”

Elekci explained that he had previously met Kaya, who is also deaf, and they had met at a café in the province of Kocaeli to talk about selling souvenirs.

He was told to come to a house in the mountainous area near the city of İzmit, that Kaya and others were at on March 22. Firat claimed this was for a job opportunity.

“We drank alcohol. Then I asked for half the money I earned from Fırat,” Elekci said in a statement. That appeared to be the catalyst for what happened next. “However, while we were splitting the money we made, Firat began to get aggressive with me.

“The person who was next to Kaya said ‘we do not give’. Then he started swearing…

“One of the people there hit me with something behind me. Then they all started hitting me. One of them even took out a belt and started hitting it with it,” he recalled. “I was covered in blood. They took my photos at that moment.”

In captions with the posts featuring Elekci, Kaya referred to the 33-year-old as “pervert gay scum.” He and four other people held Elekci for hours in a shack in the mountains, beat him up, then left him at a bus stop.

Social media coverage and Engin’s statement led to an investigation, the Scottish Sun reports. Police took Kaya into custody on March 25 on suspicion of kidnapping and attempted murder, and the Kocaeli Public Prosecutor’s Office said an investigation is ongoing.

“Anyone who openly targets LGBTIQ+ is complicit in the violence and discrimination they experience because of their gender identity or sexual orientation,” the We Will Stop Femicides Platform stated.

#FıratDelikanlıTutuklansın As well as this and similar creatures, the people who give courage to those who commit these hate crimes are guilty. We will not forget. pic.twitter.com/i6uijXTioQ

Thank you social media and thank you twitter. #FıratDelikanlıTutuklansın pic.twitter.com/d0cJ51B1EJ

Lil Nas X’s proud dad is a gospel singer. A rightwinger on Twitter found out the hard way.