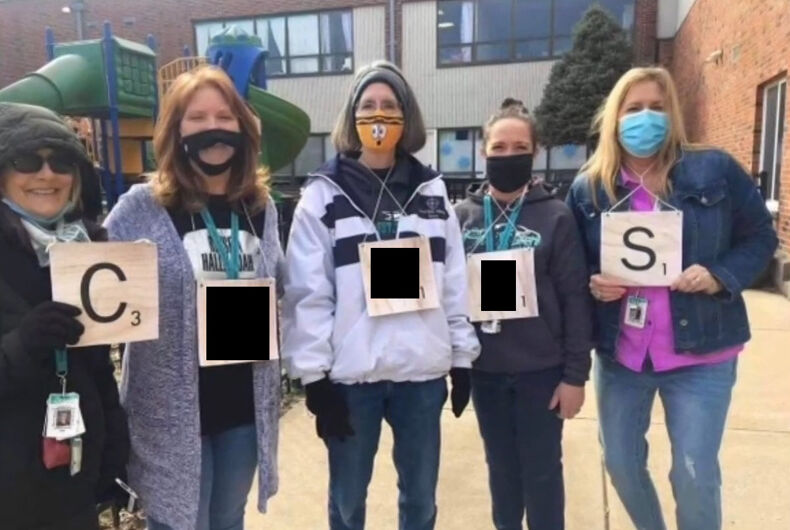 Teachers at the Christian School District spelling out the slur.Photo: Screenshot/KDSK

Five teachers in an anti-LGBTQ school were caught in a picture posted on social media holding up giant Scrabble tiles to spell out a racial slur.

The teachers work at the Christian School District in St. Charles County, Missouri and they were playing an online spelling game. They claim that they did not know that “c**ns” is a racial slur, but parents aren’t buying it.

“They were running around trying to spell raccoon, but they didn’t have the R and the A,” Pastor Raymond Horry told KSDK. He has two children in the Christian school. “I don’t believe it that five Caucasian teachers, not one of them knew that. Maybe one didn’t know it, maybe two didn’t know it, but all five didn’t know it?”

The image, though, wasn’t just a screenshot from a livestream. The teachers posted it to social media and parents say that it was even briefly on the school’s website.

One parent said that her son is “tired” of the racism because it is a common occurrence at the school.

“He absolutely told me, ‘Mom, I’m tired of it, do what you need to do because this is not fair and I’m tired of feeling like this,'” she said.

But one of the school’s basketball coaches, John Smith, is standing up for the teachers.

The school, though, openly supports discrimination. Their website says that the school teaches that marriage is “the uniting of one man and one woman in a single, exclusive union, as delineated in Scripture” and denounces the “immorality and sinfulness of sexual relationships outside of biblical marriage and of sexual relationships between persons of the same sex.”

The statement also attacks transgender people, calling being transgender one of the “spiritual consequences of the human race’s fallen condition.”

“It is our Christian conviction that renaming them cannot normalize sin and its expressions,” the site says.

The site says that “God’s Grace” is enough to help LGBTQ people “in overcoming both the practice of such activity and the perversion leading to its practice to all who confess and forsake their sin,” effectively advocating conversion therapy.

The school, though, is only issuing a statement about the racial slur, saying that it was an “ill-informed action.”

“We offer no excuse as to why this word was used,” the statement says. “In a statement to families last night, we apologized for the incident and sought their forgiveness. We also ask that of anyone who has been impacted by this picture.”

“It’s a blanket statement, it’s the same thing, we always have to forgive them for their transgressions because they don’t know how to handle racial issues,” said a parent.

A teacher spoke about a trans woman for 2.5 minutes. Now parents want him fired.