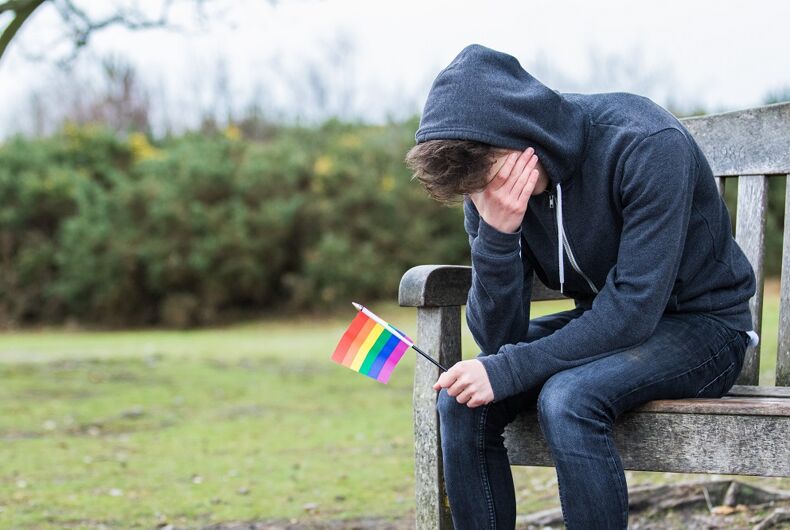 A junior high school’s administration is trying to address racist and homophobic flyers that students were passing out earlier this year.

This past March, students at McCormick Junior High School in Cheyenne, Wyoming, handed out flyers and taped them to hallways. Some of the flyers had anti-LGBTQ messages like a rainbow flag crossed out and “It’s great to be straight. It’s not OK to be gay.”

Others were racist, displaying the Confederate flag and messages like “Black lives matter only because if it weren’t for them who would pick our cotton” and “Join the KKK.”

The school’s initial reaction to the flyers wasn’t great. Substitute teacher and Gay-Straight Alliance (GSA) sponsor Kaycee Cook told local activists, and Principal Jeff Conine responded by telling her that she is no longer welcome to work at the school.

She was reinstated several weeks later.

The school also banned both rainbow flags and Confederate flags on clothes, as well as clothing with messages supporting LGBTQ equality.

“At the time, we had two opposing sides that were kind of escalating the situation,” said Superintendent Boyd Brown, effectively blaming LGBTQ youth for homophobia.

While investigating the flyers, school administrators pulled GSA members out of class and questioned them in front of police officers.

“They felt really intimidated. Kids were crying,” said parent Abby Kercher. “These were the victims. You don’t need to have police officers in there. It was just handled wrong.”

The administration “doesn’t know how to handle not just one troubled kid but systemic racism and homophobia,” Wyoming Equality executive director Sara Burlingame told the AP.

Parents and students said that there is a long history of racist and homophobic harassment at the school, like students who have pictures of the Confederate flag on their laptops.

One parent told the AP that his 13-year-old daughter was harassed with racist slurs twice this past year.

Kercher’s 14-year-old daughter said that she has been harassed at the school because she has a girlfriend.

“If we held hands, a bunch of kids would start making fun of us, pointing and laughing,” she said, saying that the kids used homophobic slurs.

The school district finished a report on diversity and harassment at the school and Boyd said that they have “a pretty good plan to try to work on all of that.”

The school refuses to release the full report, citing federal privacy laws. Several news organizations have filed a suit to get it released.

As to whether the plan will work to end harassment in the school, people told the AP it all depends on follow-through.