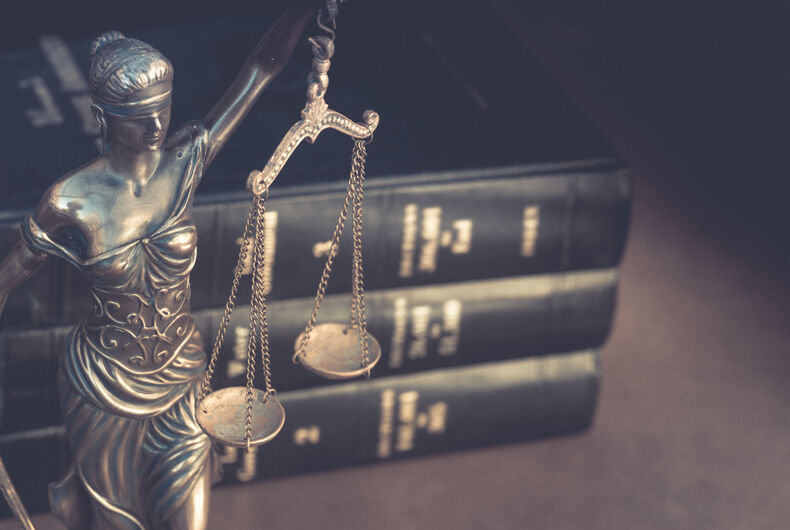 The scales of justicePhoto: Shutterstock

But while the Township Council voted unanimously to repeal the forgotten law, they discovered another one they cannot repeal.

Related: Republican governor discovers evangelicals invented cancel culture when they come for her

Depictions of homosexuality were deemed “patently obscene” under a law regulating the “sale, rental, distribution, exhibition, publication, lending, giving away or showing of obscene and other sexual material.” The punishment was a $300 fine or 90 days in jail.

The law had been forgotten over the years since the small town had never organized the city’s code into one centralized system. As they codified the laws and made them easily accessible to the public, residents and officials quickly started combing through the forgotten bits of history and found the decades old code.

Local activist Damien Christopher Warsavage led the charge to get the law repealed after it was discovered. He’s the founder of the area’s pride organization and, under the law as written, could be arrested for holding the local pride festival.

“I made it very, very explicitly clear: It doesn’t matter if you guys weren’t the actual edition of the council that passed this egregious ordinance — it’s the fact that it’s your situation to handle now,” Warsavage said. “If someone wanted to cause trouble, lawfully, whether I liked it or not, they would have had a very good leg to stand.”

The council agreed and repealed the law.

But as they investigated, the officials found out where it had come from. It was a duplicate of a state law that still remains on the books in Pennsylvania.

“I think it’s probably going to be a little bit more difficult, but not impossible [to get the state law repealed]. Upper Darby has set a precedent in a lot of things,” Councilwoman Michelle Billups said.

Warsavage has reached out to other LGBTQ groups like Pride At Work to help organize opposition from activists. The mayor is reaching out to state legislators, she says.

Reducing gun violence is possible & would be popular. Why isn’t Congress doing anything?