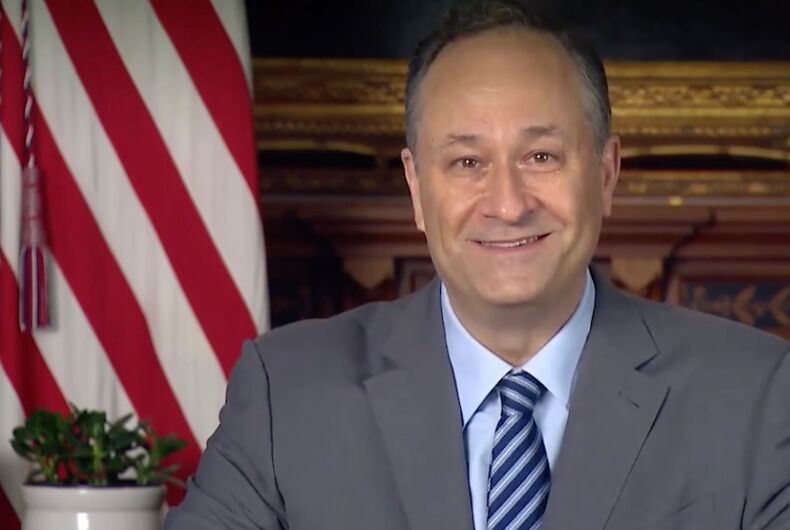 Second Gentleman Doug Emhoff, the first Jewish spouse to a Vice President of the United States, appeared yesterday as the special guest at the virtual National Rainbow Seder to precede Passover.

Emhoff, 56, spoke about emphasizing the importance of LGBTQ rights with legislation such as the Equality Act and emphasized the need to support trans youth and trans women of color.

The theme for the Rainbow Seder’s 13th annual installment was “Renewal & Resilience: A Journey Toward Liberation.”

At the event, the attendees had the opportunity to speak on different topics, read and recite the Haggadah, the text telling the story of Exodus at the beginning of each Seder celebration, which was “specially-commissioned” to link the tale of the first two days of Passover with the history of the LGBTQ movement.

“I am grateful for the opportunity to take part in this celebration of Passover with the LGBTQ community and ally,” Emhoff said in nearly four minutes of remarks.

A very special guest will be joining Rainbow Seder on Sunday! We are honored to be joined by the nation’s first Second Gentleman @DouglasEmhoff in celebrating #Passover and honoring the LGBTQ community. https://t.co/J58n2KdPMo pic.twitter.com/7gaRdsnAmP

And a special thank you to Stacy Miller and the GLOE Committee, and our partners at @HRC, @BetMish, and @IsraelinUSA for planning such a wonderful program. #happenathome pic.twitter.com/9nSkVgJcru

No, thank YOU @SecondGentleman Emhoff, for joining us at the 13th Annual National Rainbow Seder! And thank you to our wonderful partners @GLOEjcc & @E_DCJCC, @HRC, & @BetMish. #Passover pic.twitter.com/gYeGQTuHdI

“I wish I could see all of you in person, but I’m positive that whatever you’re wearing looks even better than me in the three-piece suit I wore at my bar mitzvah,” he quipped.

“The Seder is where I learned from an early age that Passover holds such power.”

“While much progress has been made, the promise of liberty and equality for all LGBTQ individuals remains a crucial struggle in our nation today,” Emhoff continued. “This is particularly true for the transgender community, and especially for transgender youth and trans women of color.”

Emhoff reiterated that the Biden-Harris administration is “committed” to affirming LGBTQ rights. He highlighted Pete Buttigieg’s and Dr. Rachel Levine’s appointments as Secretary of Transportation and Assistant Health Secretary, respectively.

Following the Seder, Emhoff resumed travelling in support of the Biden-Harris Administration’s support campaign for the American Rescue Plan, stopping by Iowa today.

The complete National Rainbow Seder stream is available below.