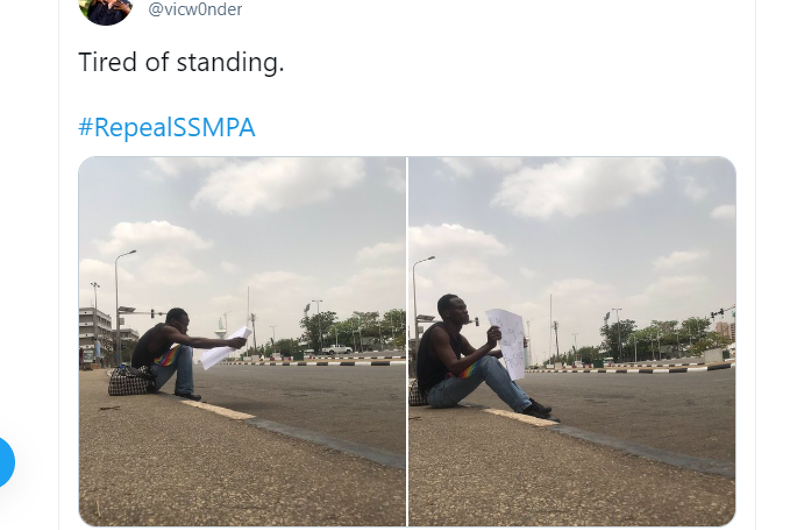 After three days, a YouTuber and LGBTQ activist in Nigeria, one of the world’s most anti-LGBTQ countries, has ended a hunger strike he started and swore to keep until the country’s ban on same-sex marriage is repealed.

“I’ve decided to suspend my hunger strike and protest at the National Assembly,” Victor Emmanuel tweeted today. “I am not ending my advocacy for the repeal of the SSMPA, I am simply taking a different approach after being advised by people who have been in the fight longer than I have.” The SSMPA is the Same-Sex Marriage (Prohibition) Act, which makes same-sex relationships punishable with up to 14 years in prison.

Emmanuel, who runs a popular YouTube channel dubbed “For F*gs Sake,” protested outside the National Assembly in Abuja, Nigeria alone to start on Saturday, Mach 20.

“It is such a barbaric law and I don’t think the state should be interested in what happens in the bedroom of two or more consenting adults,” he told PinkNews.

Throughout the three days, he stood outside the Assembly building holding signs and tweeting in support of repealing the law, using hashtags #RepealSSMPA and #EndHomophobiaInNigeria.

He live-tweeted much of the happenings including a time he feared he would be arrested when he saw officers approaching.

“Obviously, social and legal discrimination did not start with the SSMPA. But we need to them out one after another starting with what’s most important,” he tweeted on the second day of the strike, apparently in response to criticism about his approach. “I’m not about to [sanitize] the entire Nigerian populace or try to de-homophobilize them before I demand for my rights.”

I am at The National Assembly and I’m here to demand LGBTQ+ freedom and liberation!

I see a lot of this “privilege” tweets and smile because we all know who the real privileged people are.

Here again at the National Assembly. It’s Day 2 of my Hunger Strike! #RepealSSMPA Keep spreading to the world! pic.twitter.com/ht0aqVcZZf

Reminder that being LGBTQ+, isn’t Western. What is western is the homophobia we were taught by colonizers through religion. Good morning. #RepealSSMPA

Soon after the three days, Emmanuel conferred with other LGBTQ activists and decided that it was now best for his campaign to end the hunger strike and stand up for his community in another way.

“Organisation within the community is important,” Emmanuel said after the decision. “I’ve been able to raise awareness but it’s now time to use other methods maybe legislative or legal.”

They feared that the people and the government “don’t care” and that he might have risked his health by continuing on.

“The history of protests in Nigeria has shown that the government don’t really care and may not move into action, hence re-strategising with other members of the community here in Nigeria is important.”

In the end, he asks for people that wish to help to make their message clear to the government – “if you’re queer, an ally, or just a human being who isn’t wicked enough to actually think we deserve 14-years imprisonment for just existing, then I ask you to join me on this journey and send this message to the government: Repeal the SSMPA.”

The SSMPA law was signed into law in 2014 by President Goodluck Jonathan. It calls for up to 14 years in prison and bans same-sex marriage, same-sex ‘amorous relationships’, and even membership in LGBTQ rights groups or organizations.

Obviously, social and legal discrimination did not start with the SSMPA. But we need to them out one after another starting with what’s most important. I’m not about to sensitize the entire Nigerian populace or try to de-homophobilize them before I demand for my rights.

I’ll be working with them from now on.

The fight has not ended and I will continue to use my voice to demand equality and human rights for queer people in Nigeria alongside other well meaning members of the community.#RepealSSMPA