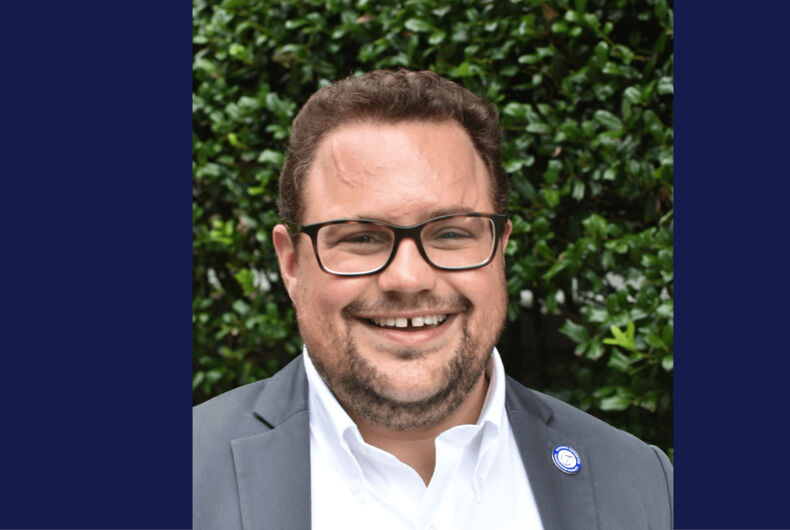 Mara Keisling, the current Executive Director of the National Center for Transgender Equality (NCTE), is not renewing her contract after 18 years at the helm of the organization.

She is retiring, she announced, and will “pass the flag” to current Deputy Executive Director Rodrigo Heng-Lehtinen.

“While it is so hard to say goodbye to this organization that I love so much, I could not be happier that NCTE’s board of directors has selected him to be the organization’s next leader,” Keisling said in a statement.

“When we founded NCTE in 2003, trans people didn’t have a voice in Washington. As a trans person, I just knew that was wrong. It made me want to advocate for trans people and it made me want to empower others to be advocates and allies. Back then we all agreed that neither NCTE nor I should be the only representative of our community. And today there are many trans voices a part of important conversations.”

“I am so proud when I reflect on what we have done together,” she continues, “to pass federal legislation, advance better ID laws, increase health care access, and completely change how the government and society sees us.”

“Together, we have established an LGBTQ movement that truly includes trans people and prioritizes our lives to this day. Indeed, we have kicked open every door in Washington and state capitals for trans people to be seen and heard at every policy table.”

Keisling states that “our work now is as important as ever as we work to pass the Equality Act, fight for trans youth, and end all forms of disrespect, discrimination, and violence that hold trans people back.” Her statement issues a reminder that “discrimination in all its forms endangers trans people. Now we must continue the work to improve policies and change trans lives.”

Keisling’s departure comes under two years after accusations of racism were levied against her amid backlash from some in the trans community, people called for her to step down. At the time, she chose not to.

“I’m not going to be here in 10 years. It’s not a promise or anything, but I’m just not. It’s really important to always be growing new leadership in an organization and we do that here,” she said in a December 2019 interview. “You know, we’ve been very focused in particular on growing people of color leadership.”

A letter signed by over 400 prominent transgender leaders – including Andrea Jenkins and Charlotte Clymer – condemned NCTE leadership for failing to address concerns they “struggled with racism and other forms of oppression.”

In November 2019, several staffers at the NCTE departed the organization en masse after they reported that their attempt to unionize was being stifled by Keisling and others. The Nonprofit Professional Employees Union (NPEU) told LGBTQ Nation that they filed a charge with the National Labor Relations Board (NLRB) that alleged that “NCTE’s work environment became more and more hostile in the months following” workers’ initial attempts to unionize beginning in 2018, “culminating in leadership pressuring staff to leave the organization.”

Throughout that period, the organization also had to face multiple bomb threats on their headquarters.

In addressing internal “racial justice and social justice,” the NCTE website reads as of this month, “we will continue to report back on our internal transformation. We will share updates and reach out to partners for ongoing conversation.”

“We know that racial justice is a journey. We’ve been doing our internal work to transform our systems and culture, and are committed to continuing to do so,” it reads.

According to the NCTE, this charge was dismissed in April 2020 after an investigation. “NCTE, including the NCTE board, remains strongly pro-labor. NCTE would be proud to voluntarily recognize a union of non-management staff,” their website states.

Heng-Lehtinen is a Cuban-American trans man and “transgender policy, advocacy, and messaging expert.” He turns 35 on April 1. His mother is former Rep. Ileana Ros-Lehtinen (R-FL), making him the first out transgender child of a member of Congress.

He has previously worked at GLAAD, the Transgender Law Center, Gender Justice LA, Freedom for All Americans, and the National LGBTQ Task Force. He co-led the “successful campaign to update New Hampshire’s nondiscrimination protections to include transgender Granite Staters,” his biography notes.

“I’ve known Rigo for a long time and have had the pleasure to work alongside him and see up close his strong commitment to advocating for policy change for trans people,” Keisling states. “He’s been working with me on all of NCTE’s policy and communications efforts since he came to NCTE.”

She adds he has been “integral in our internal transformation over the last year” and that she “look[s] forward to witnessing the continued growth of NCTE under his leadership.”

“Anybody who knows Rodrigo knows Rodrigo is a leader. It’s almost self-evident to those of us who know him,” Keisling said about her successor in an interview with Metro Weekly. “But Rodrigo is is a good manager. He has a 100 percent commitment to trans equality and racial justice.

Keisling concludes by saying “Thank you for all you have done to make NCTE the powerful organization that it is.”

Exciting news! @TransEquality announces @TransRigo, NCTE’s Deputy Executive Director, as the next Executive Director after founder Mara Keisling let the board know she was not renewing her contract. Rodrigo will succeed Mara this summer. 1/3 pic.twitter.com/ixcbfqLm66

Congratulations to Rodrigo Heng-Lehtinen (@TransRigo), just announced as the next Executive Director of the National Center for Transgender Equality! There's never been a greater need for leaders like Rodrigo in the fight for trans rights. I'm quite happy for NCTE's new chapter.

I’m deeply grateful to Mara for building @TransEquality from the ground up, and honored to be trusted to lead it into this new chapter. https://t.co/1kPwaMPdAW

Trans wrestler Mack Beggs speaks out on being forced to compete as a girl: “It’s a no-win situation”