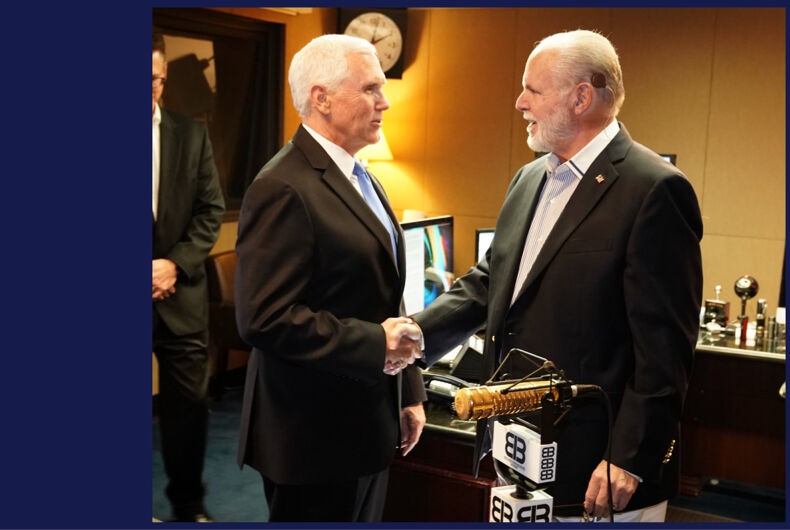 Two months after being seconds away from violent insurrectionists storming the United States Capitol building while he and both houses of Congress were in session, former Vice President Mike Pence (R) is finally going to step out and be heard.

He’s not speaking on the events of January 6 though — he’s narrating a docuseries by FOX News Media on his inspiration, the late Rush Limbaugh.

Related: Mike Pence officially hired by anti-LGBTQ Heritage Foundation. He worked for them as Vice President.

Before beginning his political career, Mike Pence himself was a commentator and radio host, and Limbaugh was his inspiration. In 2001, he described himself as a “decaf Rush Limbaugh.”

“It is a literal truth, Mr. Speaker, to say that I am in Congress today because of Rush Limbaugh,” the then-first term Representative from Indiana told House Speaker Dennis Hastert (R) in 2001. Pence ran two failed campaigns for the U.S. House of Representatives seat then held by Rep. Phillip Sharp (D).

After the first attempt in 1988, he became a daily radio host, but quit to focus on his campaign again in 1990. From there, he returned to radio and improved his image across Indiana after he tarnished his reputation by living off campaign funds. That led to his successful run for Congress in 2000.

21 years later, Pence will return to the practice of providing his voice to remember the late and extremely anti-LGBTQ radio jock jock who passed away on February 17. Age of Rush is an upcoming four part limited series produced by FOX News Media and streaming on FOX Nation.

The Hollywood Reporter reports that the series is set to debut this week on March 10.

Pence called into the network the day of Limbaugh’s death and wrote an op-ed for FOX News memorializing him for being “fiercely devoted to this country and its values and dedicated his life to promoting and protecting them.”

Starting with the launch of his national radio show in 1988, Limbaugh transformed politics into entertainment, foreshadowing the rise of Donald Trump. With a rabid following of 15 million listeners, he steered the direction of the Republican party for decades.

Limbaugh was well-known for his bias against LGBTQ people, including running a regular “AIDS Update” segment on his show in 1989 and 1990 that was described as “celebratory moments when another AIDS victim died.” Even after he stopped doing the segment, he spent decades attacking LGBTQ people with taunts and homophobic insults, even obsessing over Chasten and Pete Buttigieg kissing in public just last year.

Unsurprisingly, so is Pence. Pence’s tenure as the governor of Indiana was tarnished after he signed a law that allowed businesses to refuse service to LGBTQ patrons and gave Christians a license to discriminate.

After Pence bungled the response to a law that allowed businesses to discriminate against LGBTQ people, his support in the state dropped dramatically. While Pence was about to lose his reelection campaign as governor, he was saved when Donald Trump selected him to be his vice presidential nominee.

Today America lost a Giant with the passing of Rush Limbaugh, and Karen and I send our most heartfelt sympathies to Kathryn, his brother David, and the millions of Americans who loved and cherished his incomparable voice. pic.twitter.com/tGlhCiY7g6

And during my service as Governor and Vice President, he was the anchor of Conservatism, giving voice to a movement and fighting for the ideals that make America great.

"I am in Congress today because of Rush Limbaugh."

Republicans believe they have just the ticket to win back voters. It’s transphobia.