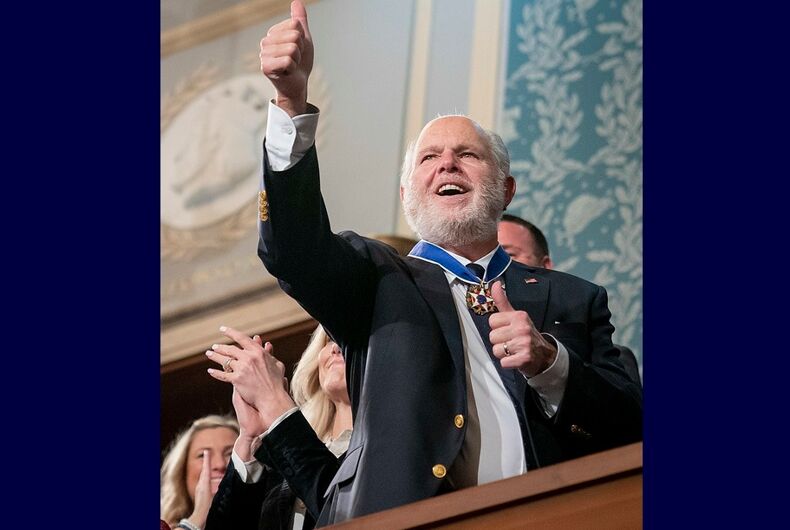 Rush Limbaugh’s death today at age 70 is already prompting a round of retrospectives about his impact on American politics.

Starting with the launch of his national radio show in 1988, Limbaugh transformed politics into entertainment, foreshadowing the rise of Donald Trump. With a rabid following of 15 million listeners, he steered the direction of the Republican party for decades.

Limbaugh also turned cruelty into a conservative attribute. He regularly engaged in viciously racist tropes, telling one black caller to his show “take that bone out of your nose and call me back.“ He wanted to rename the NBA the TBA for “Thug Basketball Association.” He said that the Rev. Jesse Jackson looked like a composite photo of criminals.

He was also a misogynist. He popularized the word “feminazi.” He labeled Sandra Fluke, a Georgetown University law student who testified before Congress in favor of birth control “a slut.”

“She’s having so much sex she can’t afford the contraception,” Limbaugh said. “She wants you and me and the taxpayers to pay her to have sex.”

Limbaugh also mocked then-Vice Presidential candidate Kamala Harris, saying the Democratic ticket should be dubbed “Joe and the Hoe.” (He spelled hoe out as a fig leaf for his obvious meaning.)

Limbaugh naturally extended his vitriol to the LGBTQ community.

Rush Limbaugh had a regular radio segment where he would read off the names of gay people who died of AIDS and celebrate it and play horns and bells and stuff.

Limbaugh referred to AIDS as “the only federally-protected virus.” He denounced spending money on “education, and condoms, and cucumbers and all that” because there was no “evidence that [HIV] was spreading to the heterosexual community, not sexually anyway.”

By the 2000’s, marriage equality became the target of his disdain.

He later said “we lost” the issue when the word marriage was “bastardized and redefined by simply adding words to it” like “gay marriage” or “straight marriage.”

“We allowed the argument to be made that the definition needed to change, on the basis that we’re dealing with something discriminatory, bigoted, and all of these mystical things that it’s not and never has been,” he said in 2013.

Limbaugh didn’t just oppose LGBTQ equality – he actually believed that gay people were out to get straight people.

He claimed in 2014, before marriage equality was even a reality in all of the country, that straight people were the real marginalized group: “They’re under assault. You say, ‘Heterosexuality may be 95, 98 percent of the population.’ They’re under assault by the two to five percent that are homosexual.”

He also said that there was a “movement on to normalize pedophilia” that was related to the movement for marriage equality. “The same things that were said about gay marriage,” he said in 2013, implying that there was a comparison between child molestation and two consenting adults of the same sex getting married.

Just a year ago, Limbaugh was attacking then-presidential candidate Pete Buttigieg for kissing his husband Chasten, wondering how it could be explained “to your children.”

Limbaugh also compared Buttigieg to Trump, implying that Buttigieg was less than a real man.

“A gay guy, 37-years-old, loves kissing his husband on debate stages. Can you see Trump have fun with that?”

Despite (or perhaps because of) the damage he did to the republic, Trump last year awarded Limbaugh the Presidential Medal of Freedom, the nation’s highest civilian honor. The honor came one day after Limbaugh announced that he had lung cancer.

By then, Limbaugh had reshaped the political scene. He fed conspiracy theories to his followers and he fueled the white racial grievance politics that is today’s GOP. Perhaps the best summary of his life is a tweet from writer Matt Oswalt.

“RIP Rush Limbaugh. Born in 1051 and remained there the rest of his life.”

RIP Rush Limbaugh. Born in 1951 and remained there the rest of his life