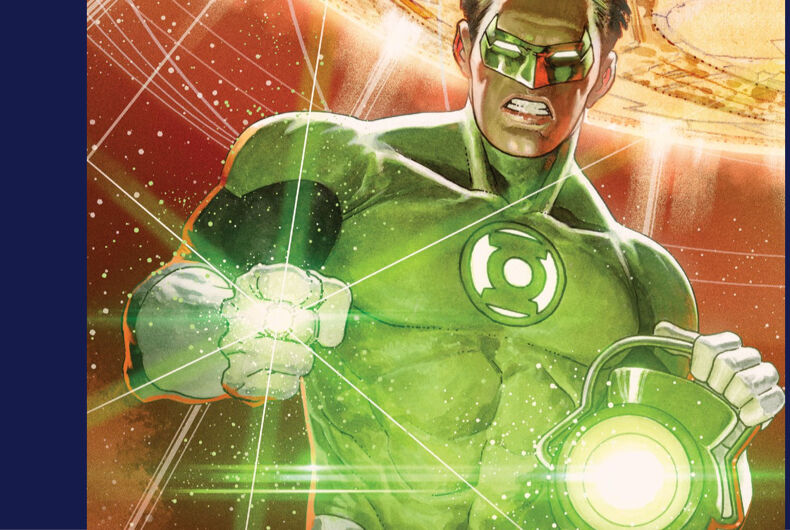 A comic book from DC Comics that is publishing today will feature the term “TERF” – short for “Transgender Exclusionary Radical Feminist,” or someone who uses the language of feminism to attack transgender people – for the first time ever.

The Green Lantern Season 2 #12 issue, the final in the series written by non-binary author Grant Morrison and illustrated by Liam Sharp, includes the words among other terms used as insults being said between a large, divided crowd. “Queer,” “fat,” “Nazi,” and “tool” are also used as pejoratives.

Based on previews, the terms were use to illustrate the divisions between people during mass clashes shown in the comic. It’s reported as the first use of the term in DC Comics history by Bleeding Cool, which asserts that it is a slur to some.

Whether its use will continue in the DC Comics Multiverses remains to be seen. The series is not anticipated to continue, and this is likely the last issue of this Green Lantern run. It’s described as the “grand finale two years in the making.”

Morrison came out as non-binary in a November 2020 interview. “When I was a kid there were no words to describe certain aspects of my own experience,” they told Mondo2000.com. “I’ve been non-binary, cross-dressing, ‘gender queer’ since I was 10 years old, but the available terms for what I was doing and how I felt were few and far between.”

Morrison, 61, now identifies with they/them pronouns. “Nowadays there’s this whole new vocabulary… I think it’s OK to lose a few contentious words when you are creating new ones that offer a more finely-grained approach to experience,” they said.

They have written this rendition of the Green Lantern comic series for the last two years, and previously worked on comics featuring beloved DC Comics character Batman, The Flash and  The Invisibles, as well as at Marvel Comics on the Fantastic Four and Spider-Man characters.

Morrison was the creator of Happy!, the comic book series turned into a short-lived television show of the same-name on the Syfy network starring Christopher Meloni and Patton Oswalt. He is also a creator of the Peacock series Brave New World.

According to Sharp, this is Morrison’s closing contribution to the DC Comics Universe. Sharp is “not quite done yet,” he said in a tweet from August.

Sharp added, “time to concentrate on his own material I think!”

Morrison is believed to be working on a novella next, and still has a partnership with NBCUniversal, the operators of Syfy.

Weird feeling. Finished my last GL cover today for #12. It’s always bitter sweet facing into the end of a run. These things become your life for a while. It gets very personal. You know them, and you love them.

It was always planned as two seasons of twelve issues each, so that’ll be it. Grant says it’s his last ever DC work. I still have four issues to draw mind, so I’m not done quite yet! :-)

There are several “Green Lanterns” throughout the DC Comics Multiverse’s 80-year history, many of whom are part of the “Green Lantern Corps,” all intergalactic law enforcement officers (donning power rings) that come from an immortal race of aliens. The Green Lantern in this series is the character known as Hal Jordan, the “reinvention” of the initial Green Lantern character.

Another Green Lantern is Alan Scott, the “original” Green Lantern first introduced in 1940. He has come out as gay in various editions released since 2012. In the latest edition of DC Comics’ Infinite Frontier #0, a currently-running comic book cycle that features Scott, he also comes out to his parents.

This week our 24 issue run concludes with this 30 page season finale. I’ve said it many times, but I’ll miss Hal and @grantmorrison loads. Already am! 💚💚💚 https://t.co/I0TxzqH5zM

Leslie Jordan tells Meghan Markle “The gays have got your back”