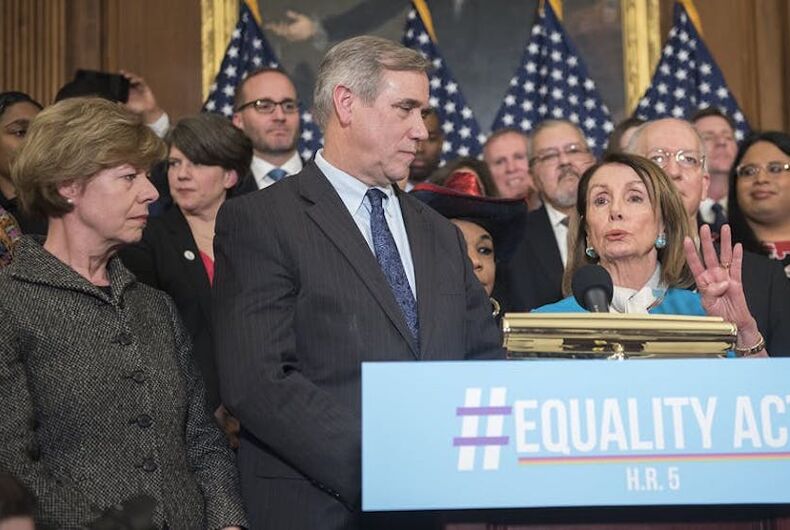 A lot of the attention on the Equality Act focuses on the fact that it prevents anti-LGBTQ workplace discrimination, but the measure covers a broad range of areas, including education and even jury service. Perhaps the other major impact in the measure is on housing.

As is the case for workplace discrimination, the bill’s impact on housing discrimination is probably and unfortunately limited if it becomes law.

Related: Can Biden deliver on his promises? We’ve got real talk on this week’s LGBTQ Nation podcast.

That’s not to say that the bill is a failure. There is no underestimating the importance of the Equality Act. The measure elevates sexual orientation and gender identity to a class worthy of the same protections as race, ethnicity, religion, and gender.

Indeed, the importance of the Equality Act is that it puts the full force of the federal government behind protections for LGBTQ people.

That alone is enough to make bigots think twice about engaging in their worst impulses. Plus, the government will no doubt intervene on behalf of some victims of discrimination in order to send a message about how seriously it takes the law. (As long as we have a Democratic administration, sadly.)

However, just ask other marginalized groups how well the existing laws are working for them. You’ll see just how much discrimination still happens. As with workplace discrimination, bias in housing can be disguised through a variety of subtle evasions.

“Many victims of discrimination encounter deceptive barriers that can be hard to detect, such as false information, neighborhood steering, and the application of different standards,” the Department of Housng and Urban Development (HUD) reports.

The classic test for detecting housing discrimination is what is called paired testing. Two people are given fictional identities that are unique, except for one key characteristic, such as race.

Study after study has shown that Black people and other non-white people seeking housing are far more likely to hit a wall, and less likely to get access to the same housing opportunities as their white counterparts.

That same issue applies to LGBTQ people as well. The Urban Institute conducted more than 2,000 paired tests in the Dallas-Fort Worth, Los Angeles and Washington, D.C. areas.

Another study, conducted for HUD, found that same-sex couples were also more likely to experience housing discrimination than heterosexual couples.

But that study underscore just how difficult proving discrimination is. One of the key reasons for the discrimination was the failure to get responses to an inquiry by email. The answer you never get is a lot harder to classify as bias, even when it is. Using the absence of something to prove your case is even more difficult.

Of course, the Equality Act will provide recourse for people faced with the landlords still stupid enough to be blunt about their bigotry. Moreover, it will give options to people in the majority of states that have not outlawed such discrimination.

But discrimination is pernicious. It doesn’t end just because the law says it must. Systemic bias against LGBTQ people will take decades to stamp out. At the least, the Equality Act can move the country further along toward that goal.