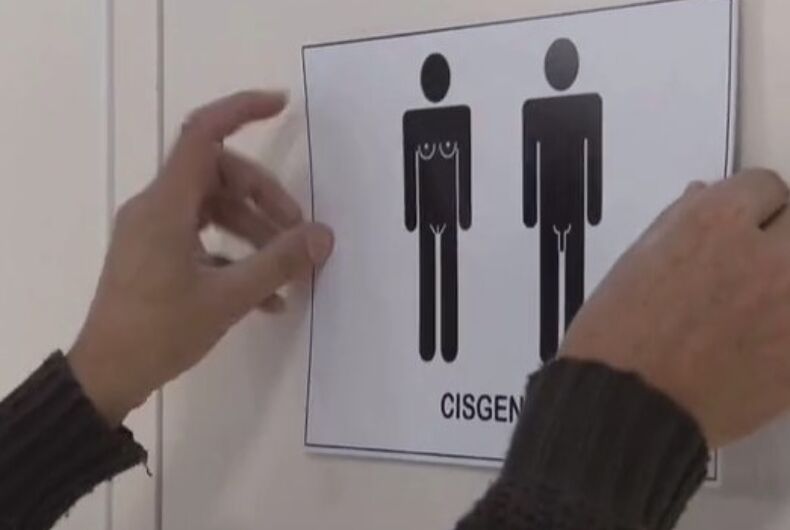 A bizarre video where people conducted a social experiment by replacing men/women bathroom signs with signs that said “cisgender” and “transgender” is going viral on TikTok.

Even though the intent of the video and its follow-up appears to be supportive of transgender equality, the video itself sounds like it was made by cisgender people who have never met a trans person before.

Related: #Trans102: everything you need to know about trans bathroom issues

In the viral video, which is in French, the narrator says that they labeled two public restrooms with signs – complete with stick figures – to represent transgender and cisgender people. Of all genders, presumably.

People who watch the video closely will notice that the cisgender and transgender signs covered up other signs that suggest both bathrooms were genderless from the start.

“How will users react when faced with these two doors?” the voiceover says, showing hidden camera footage of people walking between the bathrooms. “Unsure, some people walked back and forth, some got closer to see better, some discussed them with others.”

“People hesitated and were perplexed. Well, most of them anyway,” the voiceover says as one person goes straight to the cisgender bathroom without even looking at the signs.

The video has been viewed over 500,000 times, which is pretty big for French TikTok.

It was posted to the @nanasong account, which generally does not produce the videos they share. The caption includes the letters “RTS,” which might be a reference to the French-language Swiss media outlet Radio Télévision Suisse, but no mention of it could be found on their website or social media accounts.

Part two clarifies the intent of part one. Now people who tried to use the bathrooms explain how they felt about the signs.

“I was troubled,” says one person who was interviewed.

“I said to myself, I’m going to the bathroom that’s… I was going to say ‘normal,’ where there’s a man and a woman,” says another person. “And then I thought, that’s bizarre, what a strange idea.”

“A strange idea that raises questions,” continues the voiceover, “and makes us think about the daily life of transgender people.”

“It’s sad to not have your own place,” says an interviewee.

“It must be disagreeable,” says another. “We feel ‘neither/nor’ and… yeah.”

“I thought, yeah, that’s how it is now,” said yet another person. “Transgender…. So I was talking about it with another woman in the bathroom, and we said, well, a few years ago we never would have had this.”

On TikTok, comments are mixed.

“I’m trans and frankly this is the least of my worries, the sign on the restroom,” one person wrote. “You don’t have anything better to do?”

“Cishet people who don’t understand the difference between sex and gender,” wrote another commenter.

Most of the comments, though, are hateful or confused. Others called out the hate or proclaimed that they use whatever bathroom they feel like.

If the point was to get people to put themselves in transgender people’s shoes, then it failed.

Christians have been trying to convert me for years. I don’t need to be saved.