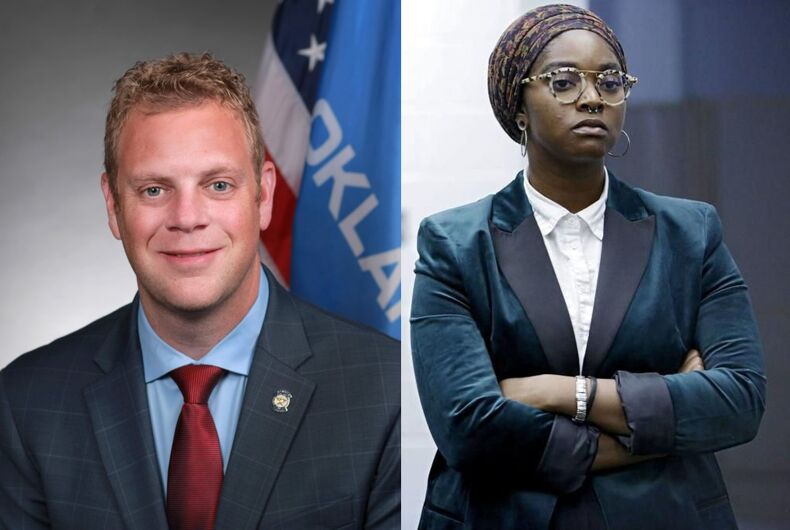 Oklahoma State Rep. Brad Boles (R) has given a tepid apology for using a racist phrase during a debate on a draconian anti-abortion bill that would outlaw the medical procedure as early as six weeks into a pregnancy. The lawmaker referred to “colored babies” in a twisted attempt to paint the religious right’s repeated attempts to control women’s bodies as anti-racist.

But the state’s only non-binary legislator had a sharp comeback for the anti-LGBTQ Republican.

Pretending to be concerned about racism is a common technique used by anti-abortion activists. Zack Linly, writing for The Root, summed it up as “the Republican tradition of only pretending to care about Black and Hispanic babies when it suits their anti-abortion narrative.”

Boles’s website touts his opposition to marriage equality and LGBTQ parents because he prefers “the Biblical definition of marriage” and children are “a gift from God that deserve to be in a home with parents that are committed to raising them with love, intention and care.”

“My colleague referencing ‘colored babies’ is how I know they don’t have the ability to make legislation that affects everyday Oklahomans in an unbiased way,” state Rep. Mauree Turner tweeted after the comments. They are the first non-binary state legislator in U.S. history.

My colleague referencing "colored babies" is how I know they don't have the ability to make legislation that effects everyday Oklahomans in an unbiased way….

“Anti-abortion efforts are rooted in white supremacy and the exploitation of Black people,” ACLU of Oklahoma Executive Director Tamya Cox-Touré said, noting that Black pregnant women die at a rate three to four times higher than white women. “Rep. Boles and his colleagues should not only commit to engaging in conversations about race equity work with the experts in our state but also actively check their colleagues on problematic behavior.”

Boles gave a tepid apology on the House floor to “anyone that I might have offended,” and said in a statement afterward, “It was a slip of the tongue that was not at all what I intended to say, nor who I am in my heart. I apologized immediately in a candid, productive conversation with several colleagues personally as well as made a public apology on the House floor.”

“In keeping with tradition, the legislator offered no real apology,” Linly wrote. “He didn’t apologize for being racist while using Black and Brown babies as pawns in the game of eroding women’s reproductive rights like he had an Oppression Bingo scorecard he was trying to complete, but instead, he tried to excuse his use of the words ‘colored babies’ as a simple ‘slip of the tongue.'”

Democratic Party chair Alicia Andrews summed up the incident best, noting, “The term colored doesn’t just fall out of your mouth by accident.”