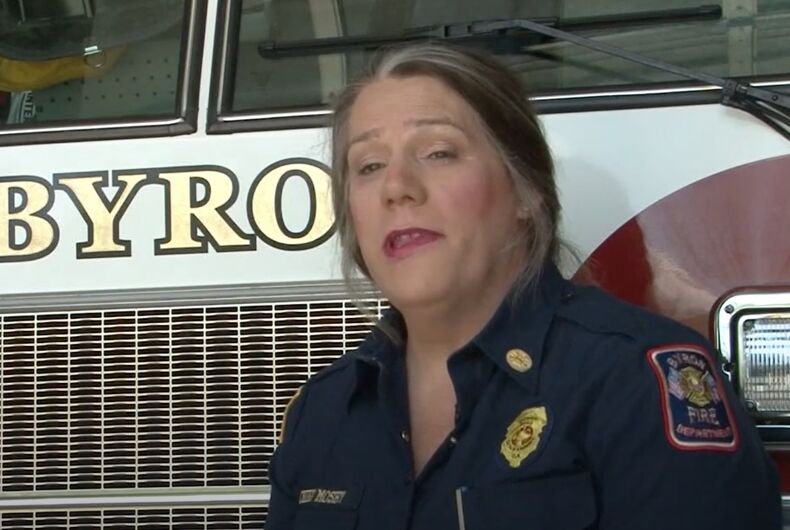 When Rachel Mosby arrived in Byron, Georgia, the small town didn’t have a fire department. She spent years building a first responders unit after being hired as the town’s fire marshal. Within ten years, Mosby had built the department into a respectable force, training firefighters, establishing a headquarters, and securing equipment and funding.

But Mosby did it all before announcing that she is transgender. Within months, Mosby says, she was fired.

Related: Trans woman lauded as hero after stepping in to help cancer patient when no one else would

She sued the local government, alleging discrimination “based on her sex, gender identity, and notions of sex stereotyping.”

A federal judge dismissed her case, saying she had no legal standing to sue because of a paperwork error made when in 2019 when she filed her initial complaint with the Equal Employment Opportunity Commission (EEOC). He did not rule on the merits of her discrimination claim.

Filing a complaint with the agency is the first process to filing a discrimination lawsuit. Mosby’s paperwork wasn’t notarized.

When her lawyer attempted to update the documents with the court, the judge dismissed the request, saying the EEOC case had already been closed. Therefore, he ruled, it was too late to correct the paperwork.

The ruling also tossed her claims that local officials defamed her character and denied her due process.

She alleges that she was reprimanded for not wearing a uniform the first day she wore a skirt to work; she previously wore a suit and tie. City officials continued to use male pronouns to refer to her.

After she fired a reserve firefighter for calling her a slur to her face, the subordinate appealed and the city reinstated him. Shortly after, the city council changed the personnel policy to eliminate appeals by department heads.

Within weeks she was fired.

The Supreme Court ruled last year in Bostock v. Clayton County that discrimination based on gender identity is a form of sex discrimination and is illegal.

Malcolm Kenyatta announces Senate campaign. He would be the first gay male senator.