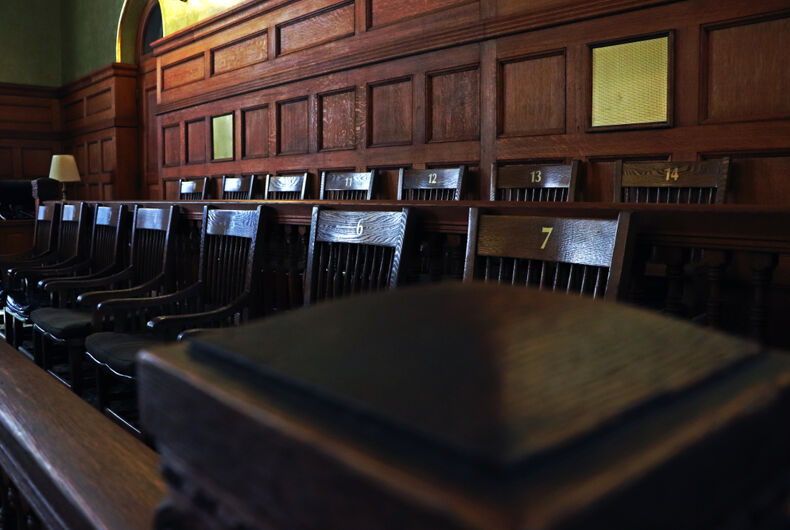 Congress is now considering a bill that would ban anti-LGBTQ discrimination in jury selection.

This week, Rep. Mondaire Jones (D-NY) introduced the Juror Non-Discrimination Act, which would ban discrimination based on sexual orientation and gender identity when it comes to picking jurors. The bill, which has been introduced independently in previous Congresses, has been added as a provision to the Equality Act this year, which could get a vote in the House of Representatives as early as next week.

“Today, attorneys can legally discriminate against LGBTQ+ people when selecting juries,” Rep. Jones explained in a tweet. “I’m introducing the Juror Non-Discrimination Act to end this injustice & ensure no one is excluded from our legal system simply because of who they are or who they love.”

I’m honored that my bill will be included as part of the Equality Act, our landmark legislation to affirm LGBTQ+ justice & equality by finally banning discrimination based on sexual orientation & gender identity.

In the jury selection process, plaintiffs and defendants can eliminate potential jurors, but federal law makes it illegal to use discriminatory reasons to strike jurors, including sex, race, religion, and national origin. Sexual orientation and gender identity are not on the list.

“The right to a trial arbitrated by a jury of one’s peers cannot be truly realized without protections from discrimination during the process of jury selection,” HRC said the last time the Juror Non-Discrimination Act was introduced in Congress in 2019. “Preventing individuals from participating in a jury simply because of their sexual orientation or gender identity infringes on the fundamental right to an impartial jury and the reciprocal right to jury service.”

The bill was introduced in the House every year since at least 2013 by Rep. Susan Davis (D-CA), even though it had little chance of passing the Republican Senate and then being signed by Donald Trump. She retired this past year and now Jones says he’s “honored to pick up the mantle” from her and introduce it again.

“Our Constitution guarantees the right to trial by a jury of one’s peers. But LGBTQ+ defendants are deprived of that right when attorneys use sexual orientation or gender identity to dismiss jurors,” Jones told The American Independent. “This is no different than attorneys in the Jim Crow-era striking Black jurors so that they could try Black defendants with all-white juries.”

According to a 2015 study by Lambda Legal, 16% of LGBTQ people said in a survey that they heard their sexual orientation or gender identity “raised by an attorney or judge when it was not relevant.”

The Equality Act passed the House in 2019 and is expected to pass again this year, with House Majority Leader Steny Hoyer (D-MD) saying that it could come up for a vote next week. The law was central to the Biden/Harris campaign and President Joe Biden is expected to sign it.

The Senate could again be an obstacle to passing the law. Democrats hold the majority, but Republicans could prevent it from coming up for a vote. Sixty senators have to vote to end debate on a bill, which means that ten Republican senators would have to vote for cloture for the Equality Act to get an up-or-down vote at all.

“Now that Democrats have retaken control of the Senate and the White House, we have the mandate to deliver on our promises to the American people by legislating justice,” he said.