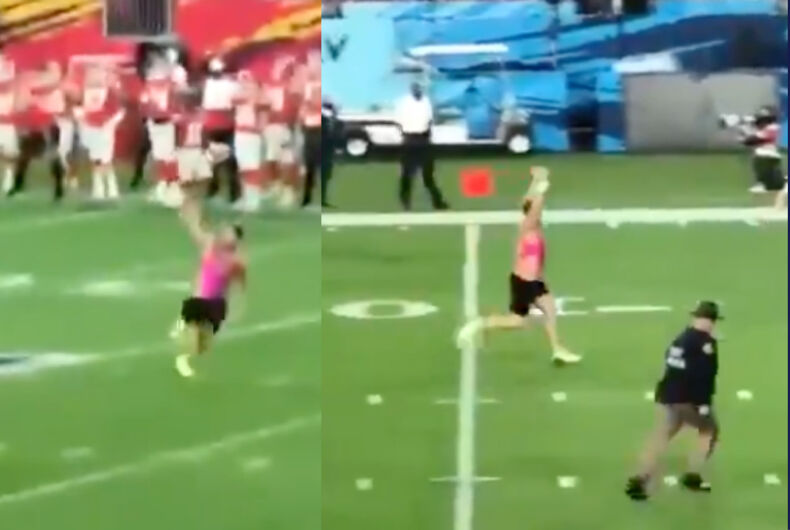 As Super Bowl LV was winding down last night between the Kansas City Chiefs and Tampa Bay Buccaneers, and it became clearer that Tom Brady would win his seventh championship, a different Florida man took center stage.

Even during a pandemic, at a game with limited attendance and with heightened security, a streaker was still able to dart across the field with about five minutes left in the final quarter of the game, nearly making it from one end of the field to the other. He was tackled one yard out of the Chiefs’ endzone.

“Someone has run on the field. Some guy with a bra,” he says seemingly with a sneer. Then, as the “guy with a bra” runs past the players, who stopped play while the intruder had his moment, Harlan gives listeners an above-and-beyond call of his actions.

Harlan couldn’t help but take further exception to the streaker’s appearance. “He’s running down the middle on the 40, arms in the air in a victory salute.”

“He’s pulling down his pants! Put up your pants, my man! Pull up those pants!”

“Pull up your pants, take off the bra, and be a man!” Harlan shouted.

Kevin Harlan's call of the idiot on the field (w/video from @rlacey23) : pic.twitter.com/iAI7WDi5xx

It’s far from the first time that Harlan, a 40-year sports announcer veteran, has had to take note of a streaker in the middle of a game. He even previously pledged to stop giving them play-by-play remarks, but apparently he couldn’t help himself at his tenth Super Bowl broadcast for radio.

Many listeners had complaints about his “be a man” remarks, simply based on the man’s appearance in pink. Some joked, but some sincerely called for him to apologize.

Transphobic af. No gender should exist, we should all be deemed human until we share our gender for that specific moment

He shouldn’t be. I think it’s ok to offer an apology this and maybe a little sensitivity training. We’re all human.

After the Steffi Graf stabbing this is now longer cute or funny. And I've seen this far too often it is not funny anymore. It's immature and a security breech. Nance and Romo were immature for making jokes. Now Harlan. The pro announcers misplayed this.

I get on twitter to see stuff about super bowl and people really analyzing 3 words in an entire 3-4 hour broadcast. What does he need to say or not say to make everyone happy? Is it not okay to think for a second that men and women are not 100% the same? All love.

Will be fired tomorrow! Sad but at least 50% chance it happens!

Media outlets like Insider and Fox News praised the call as “classic” and “incredible.” Westwood One certainly didn’t mind, sharing more of the call for fans to hear on Twitter.

For contrast, here’s the call from BBC Radio, where the announcers instead focused on the questionable move of running toward men donned in helmets and pads.

“Whether fans like it or not, ‘Pull up your pants, take off your bra, and be a man’ is now a part of the Super Bowl lexicon,” says Sporting News.