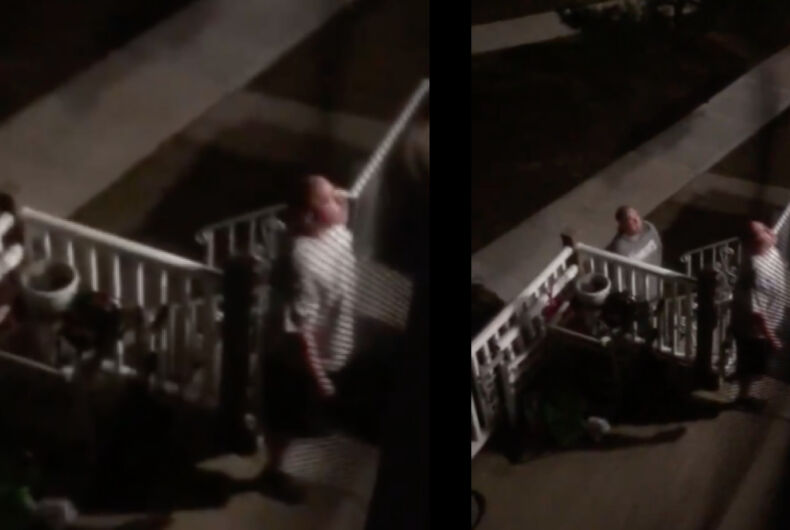 The man identified as Clifford Hammel yelling outside Joe Canale and Raymond Gamarra's home while another unidentified person watches.Photo: Screenshots

A Staten Island couple came under siege by a drunk, anti-gay neighbor, after they asked him to keep the noise down. But they can breathe a little easier for now that, more than a week later, police finally arrested the man.

In the early morning hours of January 24, Clifford Hammel went on a brazen, anti-LGBTQ tirade outside of the home of high school principal Joe Canale and his partner Raymond Gamarra. When their neighbors started disturbing them with loud noise coming from a party in the middle of the night — and a pandemic — they went next door to “politely [ask] them to keep it down.”

That provoked Hammel and another party-goer to go to the couple’s home and hammer at their front door, promising violence.

“I see you, fucking faggot,” an apparently inebriated Hammel says to them in a video captured by the couple from inside the house. “You little bitch. Fuck you. You fucking faggot….”

Hammel pledged, “Wherever you go, I will get you.” He even names one of the man’s gym of choice, Crunch Fitness, and the name of the school that Canale manages, the College of Staten Island (CSI) High School for International Studies.

“I will fuck with you,” he yells at the couple.

The moment when a man harassed a gay couple with anti-LGBTQ slurs, threatened them, and kicked the door of their home in Staten Island. pic.twitter.com/S58jKx0ooX

Canale and Gamarra called police swiftly, explaining the situation and expecting the New York Police Department (NYPD) officers to take the call seriously. According to them, though, the responding officers didn’t even take down Hammel’s name properly. Canale had to follow up with the precinct on his own for more information, and put in a call with Staten Island’s district attorney, Michael McMahon.

Almost a week later, Gay City News first reported the news and released footage obtained from Canale and Gamarra that the NYPD officers allegedly refused to review. McMahon promised a further investigation in a statement to the paper.

Finally, on February 3 — ten days after the incident — Hammel was charged with harassing his next door neighbor and arrested. He was further charged with criminal trespassing.

A hate crime stipulation has yet to be added to the criminal complaint, but McMahon said the case is still ongoing. The other man in the video, standing by while Hammel kicked at Canale and Gamarra’s door and threatened them, was not reported to be charged or questioned further.

“We’re happy that he’s being held accountable for his actions. We’re sad it had to come to this unfortunate event, but honestly, the story doesn’t end here,” Gamarra told Gay City News after Hammel’s arrest.

They also feel supported by the community more than before they stepped forward with the harrowing events, with the likes of out radio personality Elvis Duran even sharing the events on social media. “People we don’t even know have been reaching out,” Gamarra said.

Additionally, an officer from the 121st Precinct called and offered an apology for the couple’s treatment when they reported the incident.

Still, Canale is hoping that more people who can make a difference will take notice and step in.

“I think the legislature and the governor need to show some leadership here, offer some greater level of protection, and put some greater teeth in the law and statute, especially when it comes to those groups that are so frequently targeted,” Canale said, invoking the New York State legislature and Gov. Andrew Cuomo (D) and adding, “the LGBTQ community has been historically targeted by the police.”

The couple expressed gratitude for the albeit delayed action to protect them.

“We’ve felt supported and we feel that the party is being held accountable,” Gamarra said. “It is possible that there will be additional charges, but we don’t know yet.”

“As [Canale] said, the police were not showing compassion. We’re looking to advocate for and to change the laws and training that police go through,” he added.

Unfortunately, what I'm surprised about is not that this happened but that many still think naively about our equality. To be out and proud means you're constantly a target to someone, somewhere. Imagine the size of that target when you're not privileged and powerful. https://t.co/rIXnilyvlR

A drunk partygoer threatens a neighboring gay couple on camera & tries to kick down their door / LGBTQ Nation https://t.co/ayFsw3Roiy

Super Bowl announcer shouts “Take off the bra & be a man!” at Super Bowl streaker