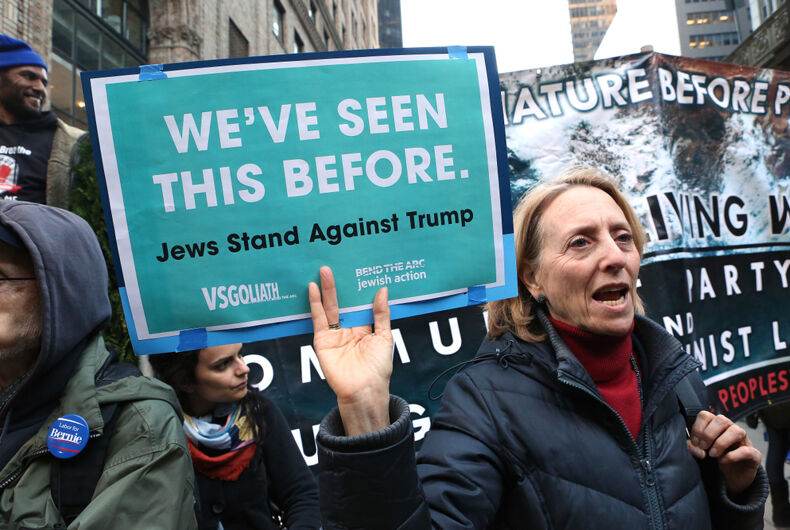 As Joseph Goebbels, Nazi Reich Minister of Propaganda boasted: “If you tell a lie big enough and keep repeating it, people will eventually come to believe it.”

Throughout history, people have believed these lies as many powerful dominant groups depicted or represented subordinated groups in a variety of negative ways to maintain control or mastery. The oppression of subordinated groups is expressed through myths and stereotypes in proverbs, social commentary, literature, jokes, epithets, pictorial depictions, and other cultural forms.

Also, throughout history, we can clearly notice the many clear and stunning connections between historical representations and oppressions of subordinated groups. I highlight here these connections in the representations of Jewish people and LGBTQ people.

As John Boswell notes in his book Christianity, Social Tolerance, and Homosexuality: “The fate of Jews and gay people has been almost identical throughout European history, from early Christian hostility to extermination in concentration camps. The same laws which oppressed Jews oppressed gay people; the same groups bent on eliminating Jews tried to wipe out homosexuality.”

“The same periods of European history which could not make room for Jewish distinctiveness reacted violently against sexual nonconformity…, and even the same methods of propaganda were used against Jews and gay people — picturing them as animals bent on the destruction of the children of the majority.”

Over many centuries, Jews and LGBTQ people have been accused of spreading and creating deadly diseases. Recently, conspiracy theorists argued that Jews, Zionists, or the state of Israel created Covid-19 to profit from developing costly vaccines. Other internet sites warn that Jews are the chief spreaders of the virus as they were also accused of doing with the Plague in the Middle Ages.

For example, Rick Wiles, founder of extreme-right Christian news channel TruNews claimed that Jews were bent on murdering as many Christians as they could on their way to impeaching then President Donald Trump. Wiles termed the impeachment trial a “Jew coup.”

The former Bulgarian Trade Minister, Krassimir Ivanov Ivandjiiski asserted that “Scientific researchers and investigative journalists alike throughout the Middle East appear to be fully abreast of the ‘Who’ and ‘Why’ behind this bioengineered coronavirus pandemic…Zionism always wins, while everyone always loses.”

A University of Oxford study found that one in five people in England believe that Jews created the Covid-19 virus for the purpose of ruining the British economy for their own financial gain.

Several white supremacist and other antisemitic encrypted sites on the dark web spread the lie that Jews are responsible for controlling Chinese labs that supposedly created the deadly virus.

In fact, in Northern Michigan, the Leelenau Enterprise published a letter to the editor accusing COVID-19 of being a Jewish conspiracy.

Several conservative Christian Evangelicals are placing responsibility on LGBTQ people and women who have abortions for bringing about the novel Coronavirus.

For example, Steven Andrew from the USA Christian Church has dubbed last March “Repent of LGBT Sin Month” to protect “the USA from diseases, such as the Coronavirus.”

“Our safety is at stake since national disobedience of God’s laws brings danger and diseases, such as coronavirus, but obeying God brings covenant protection… God protects the USA from danger as the country repents of LGBT, false gods, abortion and other sins.”

Televangelist Pat Robertson of the Christian Broadcasting Network’s 700 Club agreed that abortion and same-sex marriage are partly to blame for Covid-19 that has caused horrific death and enormous social and economic cataclysm in the U.S.

The ravages of the Black Death throughout Europe, which wiped out an estimated one-fourth to one-half of the population in the 12th and 13th centuries, were blamed on Jews, who were accused of poisoning drinking wells.

Jews have been charged with transmitting other diseases as well, most notably syphilis, which was called “the Jewish disease” throughout Europe in the 19th century, even though the incidence of syphilis within the Jewish community had been no higher than in the larger population.

Those engaging in same-sex sexuality were likewise viewed as working in league with the Devil and were accused of bringing evils into the world. In 538, for example, the Roman emperor Justinian issued a law which declared that, due to the crime of men having sex with other men, “there are famines, earthquakes, and pestilences; wherefore we admonish men to abstain from the aforesaid unlawful acts, that they may not lose their souls.”

Six years later, following a devastating plague in Constantinople, Justinian demanded that his citizenry resist evil temptation, particularly same-sex acts, “that abominable and impious conduct deservedly hated by God” and warned, “If, with eyes as it were blinded, we overlook such impious and forbidden conduct, we may provoke the good God to anger and bring ruin upon all —a fate which would be but deserved.”

In more contemporary times, the 1940 Nazi propaganda film The Eternal Jew and the 1992 U.S. radical right propaganda film The Gay Agenda portray Jews and LGBTs, respectively, as spreading infection and degeneracy, which, if allowed to continue, would result in the eventual collapse of civilization and its institutions.

In The Eternal Jew, Jews are said to commit 47% of all robberies and to make up 98% of those involved in prostitution. “The Jews,” according to the film’s narrator, “are only 1% of the population,” but they know how to “terrorize a great, tolerant nation” by controlling finance, the arts, education, and the media.

Although AIDS existed in epidemic proportions among heterosexual populations in parts of the African continent prior to its entry into many Western countries, the blame for it has come to rest on gay and bisexual men.

In fact, medical researchers in the United States initially gave it the name Gay-Related Immune Deficiency (GRID) but soon changed it to Acquired Immune Deficiency Syndrome following objections from activists, who argued against naming a syndrome of unknown origins after an already stigmatized group.

Ronald Reagan, under whose presidency the AIDS pandemic was detected and spread, had not formally raised the issue – except occasionally when answering a reporter’s question at a press conference — until April 1, 1987 in a speech to a group of physicians in Philadelphia — a full seven years after the onset of AIDS in the United States.

During his first year in office, Reagan spoke flippantly of AIDS when he stated that “maybe the Lord brought down the plague because illicit sex is against the Ten Commandments.”

Writing in 1986, Buchanan claimed, “The poor homosexuals — they have declared war upon nature, and now nature is extracting an awful retribution.”

Also, back in 1983, Buchanan demanded that New York City Mayor Ed Koch and New York Governor Mario Cuomo cancel the Gay Pride Parade or else “be held personally responsible for the spread of the AIDS plague.” And later: “With 80,000 dead of AIDS, our promiscuous homosexuals appear literally hell-bent on Satanism and suicide.”

Some even fault gays for ultimately bringing about the total destruction of human life. In his annual “State of the World” address at the Vatican delivered to diplomats from 179 countries, Pope Benedict XVI, on January 9, 2012, released a dire warning stating that marriage for same-sex couples “undermine the family, threaten human dignity and the future of humanity itself.”

The pontiff stated earlier on December 22, 2008 at a Christmas address to the Curia, the Vatican’s central administration, likening saving humanity from homosexual and gender-variant behaviors to saving the rain forest from destruction:

“[The Church] should also protect man from the destruction of himself. A sort of ecology of man is needed….The tropical forests do deserve our protection. But man, as a creature, does not deserve any less.”

Colorado radio talk show host and pastor, Kevin Swanson, asserted in 2015 that God gives HIV/AIDS to homosexuals as “retribution to their sexual habit.” This, he said, is a sign of God’s kindness because having the virus makes it more likely they will renounce their homosexuality, thereby saving them from eternal damnation.

Rather than blaming Jews and LGBT people – or China, or any other group — we must embrace science to save humanity from itself. While we do so, we must remember Joseph Goebbels’s assertion about “a big lie.”

Chasten Buttigieg sends a sweet message to his quarantined husband