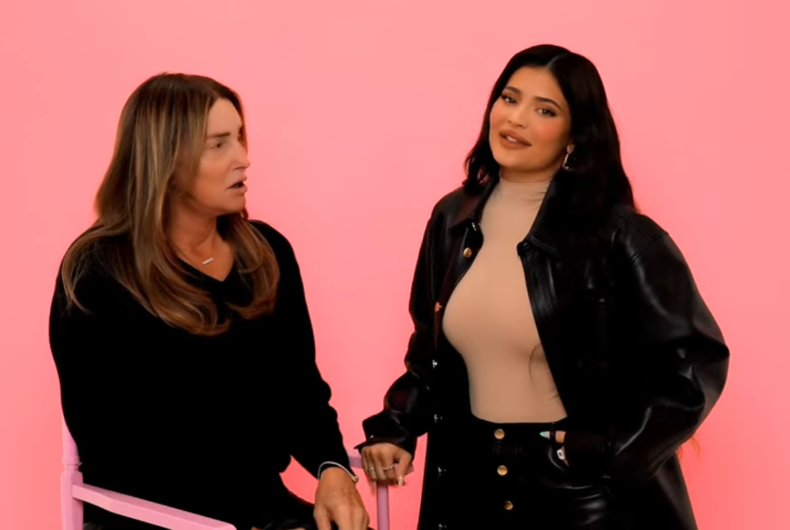 In a video posted to YouTube this weekend, Caitlyn Jenner sat down and allowed her daughter to put makeup on her for the first time.

Among other topics, Caitlyn and Kylie got candid on the topic of Kylie and her sister, Kendall Jenner, still referring to Caitlyn as her “dad” since she’s transitioned.

“This is the highlight of my life,” Kylie said in the video’s opening, because “we’ve been talking about this for forever… We saved this special moment for you guys because this is going to be the first time that I ever do my dad’s makeup.”

Caitlyn made it clear, though, that she’s very experienced under the powder brush.

“I remember one of the girls saying, ‘Well, how do you know about makeup?’ I said, ‘Girl, I was doing makeup 30 years before you were born,'” Caitlyn remarks, laughing.

Soon, Kylie begins discussing their relationship and how it was altered by Caitlyn’s transition.

“I know, like, sometimes, people get really confused when Kendall and I still call you dad,” Kylie said. “I know we had a talk a few years ago, and you were okay with us still calling you dad. How do you feel about that now?”

Caitlyn, who has six children including Kylie and Kendall, answered, “I feel it was one of the best decisions I made, and sometimes this community can be pretty tough, especially when it comes to pronouns. Everybody’s got an opinion and on and on and on.”

“But I really felt from the beginning that I gotta do it, kind of [the way] that works for me… and I think everybody out there has got to do it there way, which works for them.”

“You always say, ‘my dad, she,’ and that’s tough to kind of change the pronouns of it right in the middle,” Caitlyn added. “You guys are so good [with them]… every time I hear it, I go, ‘My girls are on it.'”

“Some people say ‘Oh, you’re the mother.’ No I’m not, I’m the dad, and I’ve been the dad the whole way,” Caitlyn said. “I will be their father until the day they die, or I die.”

Caitlyn also explained that her decision to publicly transition six years ago, before appearing on the cover of Vanity Fair  magazine, made her unsure if she would ever be able to share a moment like this with Kylie.

“Honestly, no. Honestly, I never thought… I was 65-years-old when I came [out] to do this,” says Caitlyn. “It’s like, I had to raise everybody else and I had such a life.”

Hugging Kylie, Caitlyn said, “You guys have been my best friends. My kids have been absolutely wonderful in all of this.”