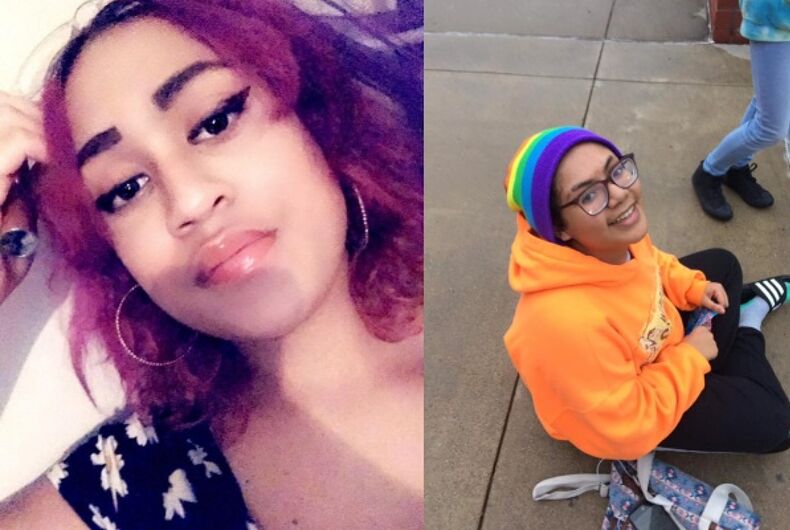 A mother allegedly shot and killed her transgender son as well as her cisgender daughter in Ambridge, Pennsylvania on Monday.

Krisinda Ann Bright, 48, called police in the early afternoon saying that she had killed her own children, 16-year-old Jeffrey Bright and 22-year-old Jasmine Cannady, according to police documents.

According to the police report, Bright shot Cannady while she was sleeping in her bedroom. She then carried the gun downstairs to where Jeffrey was, pointed the gun at him, and pulled the trigger.

But the gun didn’t fire that time.

She then pointed the gun at his face and fired. He was still alive. She shot him again “because she didn’t want [him] to suffer.”

Bright then called the police and told them what she had done. She waited for them on the porch. When officers arrived, she had blood on her hands, arms, and clothing, and she told officers that that was the blood of her children.

The officers said that they had “no issue” arresting her.

She is being held on two counts of homicide without bail.

Local media, according to PGH Lesbian Correspondents, has been misgendering Jeffrey in their reporting, even though he socially transitioned four years ago.

“He has been called JJ (Jeffrey) and used he/him pronouns since age 12,” wrote an LGBTQ organization that he attended in a statement. “This was how he was referred to by family, friends, and school.”

PRISM of Beaver County shared photos of Jeffrey and his sister on social media, saying that Jasmine sometimes attended meetings with her younger brother.

Ambridge Superintendent of Schools Joseph Pasquerilla sent a letter to students and parents informing them that one of their classmates had died.

“This loss is sure to raise many emotions, concerns, and questions for our entire school, especially our students,” he wrote, saying that counseling will be made available to deal with the loss.

Update: LGBTQ Nation received a statement from Bright’s cousin Rebecca Skyler, who said that she suffers from PTSD after being in the military.

“We don’t know what triggered her, and neither does she,” said Skyler. “But she doesn’t even know what happened. She didn’t come out of it until after they were dead.”

Skyler said that Bright called the police herself and left the rifle empty to avoid any further violence.

She is convinced that the killing was not a hate crime.

“Krisi is, was, and always WILL BE a staunch supporter of human rights for all people,” she said, adding that she’s not “transphobic, homophobic, etc.”