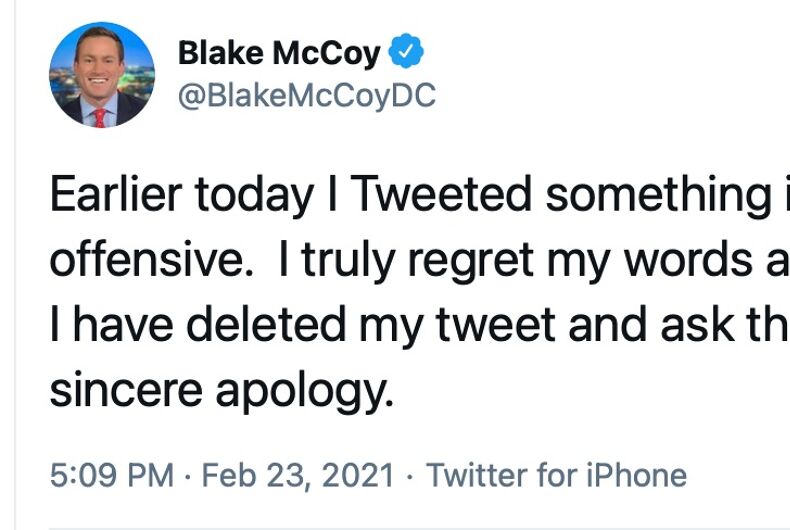 Blake McCoy, a gay news anchor for Washington D.C. station Fox 5, has apologized after tweeting that he is “annoyed” that obese people are able to get the COVID-19 vaccine before some other groups of people.

He subsequently issued a bland apology that followers said sounded like it was provided by the corporate “media relations department.”

“I’m annoyed obese people of all ages get priority access before all essential workers,” McCoy tweeted. “When most stayed home, we went into work everyday last March, April, May and everyday since putting ourselves & loved ones at risk.”

“Vaccinate all essential workers. Then obese.”

McCoy broadcast from his home at the beginning of the pandemic. He has, however, posted photos on Instagram of his travels around the country – including Hawaii, California, West Virginia, and New York. In most of the photos, despite being surrounded by various groups of different people, he is maskless.

TV news anchors are not considered essential workers in D.C. Obese people, however, are at a greater risk of contracting and dying from the coronavirus.

This shameful anchor at @fox5dc, @BlakeMcCoyDC, needs to be fired for his disgusting tweet regarding who should receive Covid vaccines. His apology rings hollow!

And as a fellow DC gay man, he should be even more ashamed of himself for this.

Blake, which comorbities are Ok? pic.twitter.com/se9FbE9d09

After deleting the tweet, McCoy responded to one upset fan, saying he removed it so he didn’t feel obligated to explain himself, adding that he knows several people who have lied to get access to the vaccine early.

His apology is empty since he says the real reason he apologized is this: pic.twitter.com/yl0EnXOnZK