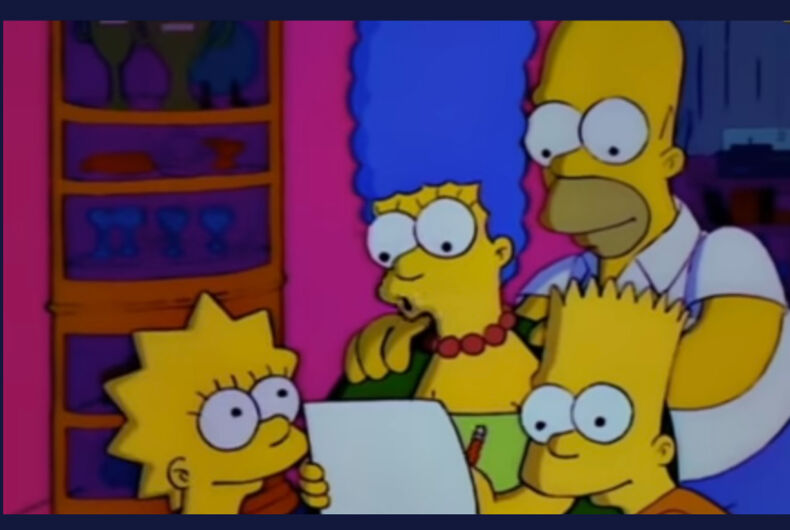 Are you busy for the next two-plus hours?

If not, why not review every gay or queer joke from the first 32 years of The Simpsons? We’ll all run out of lockdown/quarantine binges eventually. Maybe it’s time to see if you’re a “Homer-sexual.”

Related: This is what Homer Simpson looks like after RuPaul’s drag makeover

The classic animated sitcom has aired non-stop over the last five decades, and satire of LGBTQ people or LGBTQ topics have been part of the show nearly since the start in 1989. For example, the show’s well-known, long-time closeted character Waylon Smithers — who officially came out in 2016 — made his first reference to his sexuality in the eighth episode of the show, “The Telltale Head.”

So Drew Mackie of the Gayest Episode Ever podcast decided to sit down and put them all together. Why?

“Well, for one thing: quarantine,” he says.

“But this project actually began when I was preparing to record a Gayest Episode Ever [episode] about “Three Gays of the Condo,” a season 14 installment of The Simpsons, I was trying to find a chronological list of every LGBT reference ever on the run of the show and discovered that no such list existed online,” Mackie explains.

“I figured that if anyone should put one together, it should be the co-host of Gayest Episode Ever, a podcast about LGBT-focused episodes of classic sitcoms.”

So over the last year, Mackie scoured every episode of the show’s already completed 31 seasons, and encompassed any joke or reference he noticed in the 684 episodes (he encourages you to let him know if there’s any he missed.)

Although the show did depict homophobia regularly, it was far from completely mocking LGBTQ people, especially as time progressed. In fact, one 1997 episode deals with Homer’s homophobic ways when John Waters stops by Springfield.

The episode, which came months before Ellen DeGeneres came out, was nearly blocked by the network from airing due to censors.

After completing the compilation, Mackie felt that “the show introduced me to a lot of elements of gay culture that I wasn’t getting anywhere else. That’s been good in some instances, but often it also taught me bad lessons about what it means to be a gay person, in that way that happens when you’re young and your brain just absorbs everything without really understanding it.”

“I didn’t grow up to be much like Smithers,” he explains, “but I still wanted to lay out everything the show offered me — the stuff that holds up today, the stuff that doesn’t age well, the stuff that maybe wasn’t great even back in the day — and let viewers decide for themselves what works and what doesn’t.

“Regarding the T in LGBT, there’s a lot more that can be improved,” Mackie notes. “The show may have progressed with how it uses gay and lesbian characters — Smithers and Patty in particular — but it hasn’t done much to represent transgender characters.”

Can the Texas weather debacle cause the Lone Star State to finally turn blue?