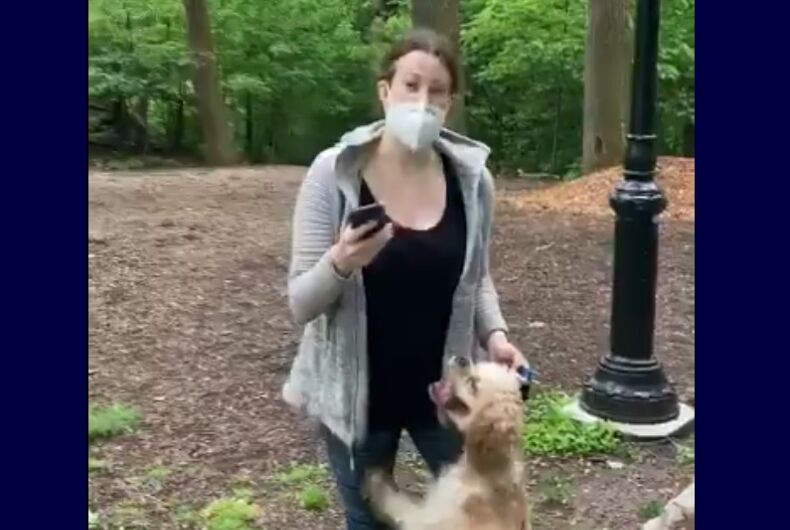 Amy Cooper, the woman known as the “Central Park Karen,” has had all charges against her dismissed that stem from the May 2020 incident that sparked widespread outrage.

She was caught on video throwing a tirade after being asked by a gay Black man that was birdwatching to leash her dog in the Rambles area of Manhattan’s Central Park.

The man, Christian Cooper — no relation to Amy — recorded as she then threatened to call the police. “I’m going to tell them there’s an African American man threatening my life,” she said — and that’s exactly what she did, despite video evidence clearly showing the contrary.

It was also recently learned that Amy Cooper called the police not once, but twice after encountering Christian.

Amy Cooper lost her job after the video went viral, and she gave up her dog after she faced criticism for how she held him by his collar. She quickly became a symbol of how white people use the police to oppress Black people, and the state of New York passed legislation in her “honor” that would allow people to sue if someone falsely calls the authorities because of their race, gender, nationality, or other protected classes.

The video went viral and became the talk of the country right as the widespread Black Lives Matter protests and conversations about race took place.

Christian Cooper, a well-known birdwatcher, was an editor for Marvel Comics and a host on the Gay USA podcast. He wrote the first Star Trek comic to feature a gay male character, Yoshi Mishima, in April 1998.

He managed to walk away from the brazen attempt to get him arrested (or worse) unscathed, then chose the high road in the well-publicized aftermath of the incident, announcing that he did not wish for Amy to be prosecuted and that he had “zero involvement” in the Manhattan district attorney’s subsequent prosecution.

“She’s already paid a steep price,” he said in a statement in July. “That’s not enough of a deterrent to others? Bringing her more misery just seems like piling on.”

Christian noted that there was a larger issue at play in the prosecution and that he wouldn’t stand in the way.

“We are strongly committed to holding perpetrators of this conduct accountable,” said Cyrus R. Vance Jr., the Manhattan district attorney, at the time. They continued on with Amy’s prosecution on one count of falsely reporting an assault.

Amy would likely have received community service if convicted, but she voluntarily completed therapy sessions and other requirements of a restorative justice program, prosecutors told the court.

The therapist reported that “Ms. Cooper could appreciate that racial identities shape our lives, but we cannot use them to harm ourselves or others,” Assistant District Attorney Joan Illuzzi told the court today.

After the dismissal, Amy’s lawyer, Robert Barnes claimed on Twitter that “others” had “rushed to the wrong conclusion based on an inadequate investigation” and said, “they may yet face legal consequences.”

After a thorough & honest inquiry, the New York DA's office dismissed all charges today against #AmyCooper. We thank them for their integrity & concur w/ the outcome. Others rushed to the wrong conclusion based on inadequate investigation & they may yet face legal consequences.

Texas lawmakers are trying to pass pro-LGBTQ proposals. Do they have a chance?