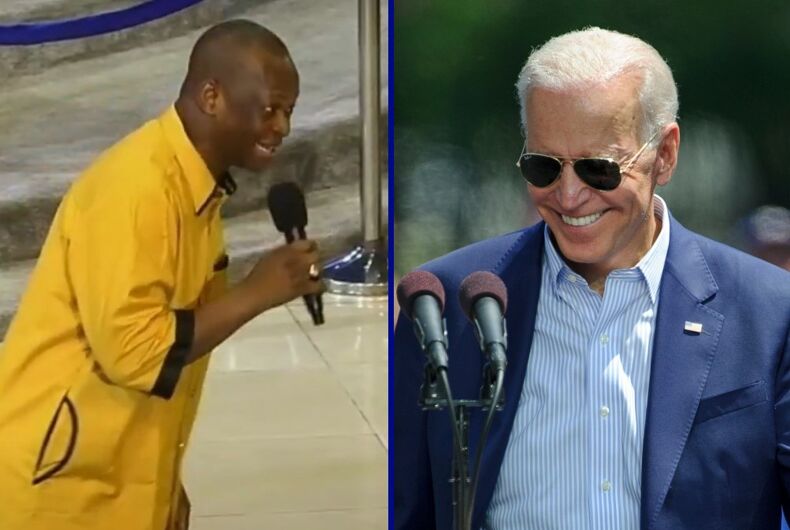 A Nigerian bishop went on a bizarre rant last week in a newspaper interview where he said President Joe Biden should “marry a man in Nigeria as his second wife. He must practice what he’s preaching.”

The rant came in response to a presidential memorandum issued by Biden earlier this month that called on the State Department “to ensure that United States diplomacy and foreign assistance promote and protect the human rights of LGBTQI+ persons.”

“America can no longer afford to be absent from the world stage” and must protect “every ethnic background,” LGBTQ people, women, and religious minorities, Biden affirmed.

This upset the national publicity secretary of the Pentecostal Fellowship of Nigeria, Emmah Isong, because he believes that Nigeria’s harsh opposition to LGBTQ rights doesn’t go far enough. Same-sex relationships are illegal in the largest country in Africa – and the seventh largest in the world, by population – and can be punished with up to 14 years in prison. The country even bans people from showing affection for the same sex, operating LGBTQ organizations, and witnessing a same-sex marriage.

“America is a country that believes in the tenets of democracy which is freedom of speech, and I believe that Nigeria is an independent nation, we are not a nation under America,” Isong told Sahara Reporters. “We are not among the states under American nation. We have the right to be anti-gay, I believe no one can sanction us for that.”

“If they sanction us for being against gays, we can sanction them for believing in it.”

He admonished the Biden administration, saying it had “not communicated officially with the government of Nigeria,” even though the memorandum was about how the U.S. State Department should act, not an imposition of sanctions.

“Let there be an official gazetted letter signed by the Secretary of State of the United States telling us to become gay, then we invite the president of the US to come and marry a man in Nigeria as his second wife,” he said. “He must practice what he’s preaching, if the president of America wants Nigeria to practice gay, he should come and marry a man from here so we will know he means business.”

In the interview, Isong said that Nigeria doesn’t go far enough when it comes to repressing its LGBTQ population.

“Nigeria is hypocritical, they treat the gay movement with cheap blows,” he said. “You can see a lot of people parading themselves as transgenders, cross-dressers and gay people; no police have arrested them. There is no single police officer that has arrested any cross-dresser in Nigeria, so how do you think America will not capitalise on that and say what they want to say?”

In January, the son of a prominent anti-gay Nigerian politician came out on social media as “Gay AF,” causing a stir online.

“I hope one day you will educate yourself. If not, I don’t care; you will die ignorant and on the wrong side of history,” Bolu Okupe, the son of politician Dr. Doyin Okupe, wrote in the replies of the post, which showed him shirtless and holding a rainbow flag. Okupe resides in Paris.

Are you ready for Aromantic Spectrum Awareness Week?